Can you escape?
Submitted by ScienceJ — 1 hour, 27 minutes before the deadline
Add to collection 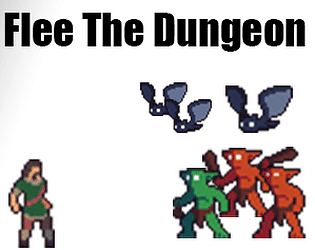 The game clearly needs some clean-up as you mentionend. I could'nt geat the 9th floor since the game crashed my browser after I attacked the big ennemy. Also as several other games in the jam it doesn't completely fit the theme but that's ok.

The pixel art is really nice as well as the animations, but maybe you can simply adjust the import settings of your sprites to fi the filtering as the game looks quite blury. Unless that's the style you're going for. If you want crisp pixel art on Unity change the filter settings to 'Point (no filter)" and the repeat mode to "Clamp" (The big orc with 10dmg has some pixels of the feet repeating over his head).

Maybe the UI could be unified with more stylized buttons and font.

I liked the fact that the powerups at the end of each fight are predictable, this allows long term strategy (For example I chose to first increase attack to be able to one-shot the ennemies up to a certain point, and get more and more hp until then)

Also I don't really know why but the game reminds me some old games I played as a kid :)

Anyways, great job on this one, continue working on it, the game has a lot of potential :)

Currently there is still much to do in terms of cleaning up. Animations, UI, etc.

But I have a lot of plans for the future of this game. Party members, weapons, and many other features.

I am hoping to get enough attraction to launch a Kickstarter campaign.