Battle the demon within
Submitted by trust_me — 23 hours, 35 minutes before the deadline
Add to collection 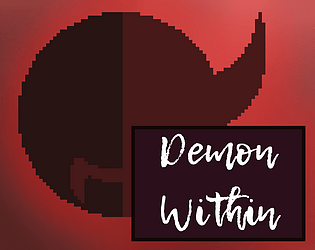 I should mention that for some reason the game only took up a quarter of the game window. It was therefore playable for me but very very small. I played on macOS with Chrome.

Submitted
Enemy of my enemy
LikeReply
trust_meDeveloper1 year ago

Oh I see, I used the small screen for testing but by the time I had to submit I didn't know how to properly scale up the window size so I just stuck to the same size. Ah didn't think it would be an issue. Thanks for letting me know :D

Nice music. I really struggled with the second part of the game, it was just a bit frustrating to redo the first level before every try. Well done !

Oh I see, I guess I didn't realise that after play testing so many times. Maybe I should at a replay at the second part. Thanks for the feedback. Glad you liked the music.

Nice idea i like the concept i spend a lot of time trying to end that but when i go to the star level i use a\s\d\w keys and get out of the circle and the game crashed...

Music is awesome! nailed the theme I think. The only thing I would like to point out is the font, it was a bit difficult for me to read the text in that, though I do get what you went for, maybe an option to switch font? Anyways, nice job!

Glad you liked the music. I will definitely work on the font in the future. Thanks :D

Hey it gives me this error on playing undefined is not an object (evaluating 'GLctx.getParameter')

Submitted
The Revenge Of The Demon
LikeReply
trust_meDeveloper1 year ago

Oh! After googling basically this error means that the game is not compatible on your browser. Like the rendering thing no work.

Yeah good work for first jam, like the Music and the pacing of it.. The ide was new and interesting. Have no complains just would love that it was different minigames. But it's a week and a week is short! :)

Submitted
Once Upon a Bounce
LikeReply
trust_meDeveloper1 year ago

Yeah a week was suprisingly short, had to cut a lot of things out. Thanks for playing :D!

Ooh that was tense :D I really liked the pacing of the game. Also, it was hard enough to not be possible for me to finish at my first go, but not hard enough to make me frustrated. One suggestion: at the endgame, most of the time it was better for me to just let the daemon jitter without interaction. I think it's because the daemon's movement does not gain momentum. If it did gain momentum, the later I counteracted a movement, the harder it would become.

That's an interesting concept actually. What I did to make it spasm was just randomise its movement relative to how completed the thing was. But your idea sounds much better. I will look into that. Thanks

It's a really nice game, especially the music. I think the character is a bit too fast though, i accidentally ran out of the circle a few times just because of the speed. Also yeah, the font  is barely readable. It's really a great game and i liked the tension it creates!

I was thinking of making it so that it was super sensitive as you got close to ending so it felt like you were your own enemy. Ay! :D Yeah font seems to be a big problem. Glad you liked the game and the music.

Yeah, you absolutely nailed that feeling, but it was still quite annoying (I got the bad ending because of that)

Really cool concept. Its a bit difficult but not in a bad way. The font could be slightly more readable. I think the mini game didn't register my hit sometimes. Maybe add 1-2 mini games for variety ? Other than that, I really like the atmospheric horror you have created. Good work!

Yeah, I am really proud of the music. I originally wanted a couple more minigames, but didn't have time ;-; Will change the text too I think to something  more readable. Thanks for playing sir :D

This is a cool atmospheric game, but we need to talk about the font. I can't read anything! Cool text but I would shoot for something a bit more legible. Otherwise all cool. :)

Submitted
Sleeping with the NME
LikeReply
trust_meDeveloper1 year ago

Yeah I will try to use more readable fonts next time, glad you liked it! :D

Nice idea and a fun game, but a bit weird.

An interesting game. I tunnel visioned in the second mini game not noticing the completion bar at the bottom and was super confused as to what I was supposed to do until I saw it haha. I liked the searching mini game as well. Nice job!

Thanks haha. Did you complete the second part cause I can't do it consistently haha. My friend who was playtesting told me to amp up the difficulty

I think it's a good difficulty. I cut it pretty close with like 4-5 seconds left. One other thing I forgot to mention that I felt kind of took away from the game was the font. I was a bit uncomfortable trying to make out the words. In the future I'd recommend going with a font that's easier to read.

I see, heard that from some of my friends as well. Thanks for the feedback

The game is nice! but is very hard i was unable to and did not understand why i would need to lock the doors. but anyways its a nice game the i really enjoyed!

Submitted
Fight With the Devil
LikeReply
trust_meDeveloper1 year ago

At night when the player transforms, he heads to the door which leads to you losing, locking allows you to slow the demon down basically. I made it so that players had to like look at the time they are spending on searching because they had to lock themselves into the rooms to survive.