A Puzzle(ish) game made in one week for a game jam
Submitted by Arcadonauts — 1 hour, 53 minutes before the deadline
Add to collection 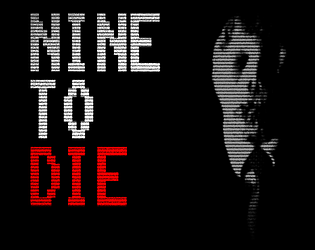 I really liked the look and feel of it, and I enjoyed reading your devlog, thanks

This is really impressive for 1 week! Feels like a professional game with a really cool aesthetic, this game has a great atmosphere! It definitely pulls you in and makes you feel responsible and want to do your job. I do like how it feels that it's very quiet, as if I'm alone in a security room checking the footage, but a little sound effects would help I think. And yeah, the glitch bugged me every single time because it took way too long and was overdramatic, I like the idea but just toning it down and making it quicker would be much better. Overall I had a great experience, it was really immersive and I love it! Well done for one week, really.

Also thanks for checking out my game!! :)

Wow! Thanks for the feeback.

You are 100% right about the lack of sound effects. At the last minute I added some "bleeps" and "bloops" but at the laster minute I took them out because they were to goofy and ruined the "feel." If I knew more about sound design I could have made some better sounds, but the ones  I made just weren't good enough.

Thank you very much for you kind words. "immersive" was exactly what I was going for!

Yup I understand, I'm not great with audio either :P It's ok!

Your game has the highest learning curve that I've played so far but once I understood the mechanics well I liked it It was thrilling to pause and look at the security footage and try and deduct the shapeshifter. I am writing this comment and giving a high rating after only doing the Practice and am on Easy but I can see myself playing this game even after the jam occasionally.

I love the tension when you submit your answer and you're anticipating the response. I do wish the game taught more of how to 'play' better but I do like that I had to figure out for myself that I was supposed to find someone who would be absent in all security footage. Everything also feels really really responsive too which is great. The game definitely has polish.

Also I love the idea of having a compromised agency and you have to figure it out using security footage and stuff as a shapeshifter is inside. It makes perfect sense with the theme.

The artstyle of this game is really cool and I love it. I love the CRT filter over the FBI agent in the dark and the shapeshift art version of it and I love the clean ascii-inspired outlines of the rooms. It really adds to the atmosphere. All the visuals are also really clear and the simplicity doesn't add unnecessary fluff.

There is no audio but I actually think it adds to this game in particular so I rate the Audio Experience 4/5. I do think if there were little static-y noises and sound feedback (like having the sound effect of switching cameras when hovering over a room, having the sound effect of a timeline rewind when rewinding and more general CRT noises) and button sounds would add a lot to the experience but it's also not necessary for this game. I like the quiet aesthetic.

The little visual effect occasionally where the screen goes all wavey is kind of annoying though.

If I were to add more to this game post jam I would add more personality in terms of looking through the files and seeing a randomly generated description for each Agent and character (maybe even a headshot picture for them) in order to make them feel more like real people. I also think that an additional challenge of having each employee have a different 'clock in' and 'clock out' shift schedule would also add to the challenge.

Edit: Reading through your dev log, you also found the distortion effect annoying lol. Making the shapeshifter's face by craving the apple is just insanely cool and I love that trick. I may have to use physical real life objects and digitally alter them more in the future.

I appreciate your comment more than I can express. It's a heck of a lot longer than your average game-jam comment and it really makes me feel good to know someone cared enough about my silly little game to write so much.

Holy cow! Thank you so much!