Do you want to get a little angry? Your task is simple get the highest score but i do not think you stand achance
Submitted by TenNapy — 2 hours, 21 minutes before the deadline
Add to collection 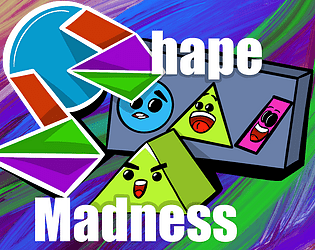 I like this one ! But the start is really hard , like the first wall is really near the player at the very start xD ! Nice one !

Thanks for feedback. I wanted to add a countdown before start, but I somehow forgot about that😂

It's a simple concept of the kindergarten game where you put the object into the right holes and I think it's a decent starting point. I think if I were to expand the gameplay I'd start to introduce more holes and having to match them by color too but there's not much I feel that could be done with it. That's fine though, as simplicity can always be sold with good polish

I like that you tried to speed up the speed early on in order to make it more difficult but I felt that the rate of difficulty was still a bit too slow. I also would've added a button that'd let me 'dash' to the next line once I am confident my current shape matches.

I found the music a bit annoying especially since it wasn't a clean loop. I do think having it go faster and faster as you get faster would've added a lot more to the game too.

The game is really simple but with a bit more polish I think it can work well as a minigame in another game, similar to the microgames in WarioWare or how in some games you can play a game within the game. It was an alright game though and I did try and play it more to get a better score.

Thanks for a feedback! The kindergarten game is exactly what I was thinking of when creating the game. The dash type thing is something I am planning on adding and the thing with colours is a really cool idea! Thanks for that. Soundtrack is super annoying I know :D Anyway once more thanks for a great feedback :)

Thanks a lot and i am glad you enjoyed the game. I do not want to make excuses but this was for me the first time creating some 3D graphics. Anyway thanks once more :)

Also I would really appreciate if you would check out my game too :)