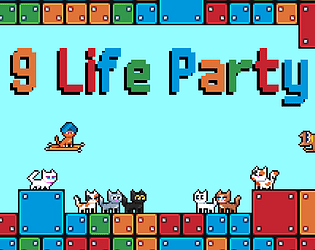 Very cute idea and graphic! The animation is quite juicy.

and the cats have different ability? Genius!

Awesome game mechanics, the visuals and sound are amazing as well. Phenomenal job.

If I had to nitpick, I'd say that the camera's movement was a little sporadic, but otherwise it's an amazing job man :)

I really liked the art and level design of the game the only thing that I would say is the magic carpet cat feels a bit floaty pun intended.

I liked the level design of the game. Levels are design to be challenging and to explain cats abilities. it is done very well. And I like how this game combines puzzle and platforming mechanics.   I enjoyed this game so much

Why everyone use my same idea but in better way

Really great job, you took a simple idea and built on it with a lot of creativity, I really enjoyed discovering all the powers of the different cats.  The music loop was a bit short but very catchy and the graphics and animations are amazing. The idea is really worth to expand in a complete game.

If you want, check out out game too, thank you!

Thank you so much for your kind words!
Sorry about the music loop I was planning to make it twice as long but ran out of time.

Wow, what a great atmosphere. The art style, particularly the cat that walks up walls has a hilarious edge to it. The level with the flying cat had some fps lag but it was really challenging and fun. The music gave me a super Mario vibe, it had this up beat head in the clouds kind of feel.

I also struggled with the second level, after the jump pad cats I used the cannons to create a small ramp and then a speed boost on top of that ramp with some offset, then used jump cat to easily jump over. I found creating 3 speed boosts back to back didn't work effectively. The second level is confusing and I really persisted in order to play the rest of the game. It was great but maybe others will not be able to enjoy the entirety of it. :)

Incredibly cute, great feedback system and fun visuals with spunky music. Similar platform idea to another submission, but the different platforms for different cats was nice. I struggled to get past the second level, so maybe some guidance for understanding the mechanics? I don't really enjoy games where you have to continuously start over, but the playfulness of this helped to counteract that.

Thanks for playing, in the second level the fat cats act as bounce pads and you can jump extra high if you hold the jump button. For the second part, the white cats are fast and their bodies also turn into boost pads.

Thank you. I had tried jumping, but not holding jump down. I will try that.