Try not to make a mess of the ecosystem
Submitted by RustyRocket — 2 days, 21 hours before the deadline
Add to collection 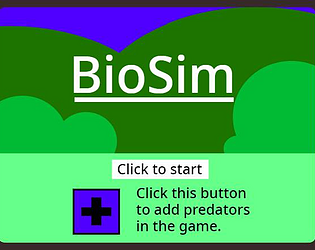 Hi, so i played the game and now im gonna comment about it. Now i'd say that this is the wrong interpretation of a habitat system. Most of the time it's either a game, where you make different animal species evolve or a sort of test to see what would happen. And that is no easy task. It requires the knowledge of machine learning and you have to know how AI works, what are neural networks and so on. Now, i don't know much about AI myself, only a bit, i understand the fundamentals. The game as it is, is a pointless piece of software. No matter what, the one result one can achieve is the death of the habitat, so the point of the game is to see how long the habit will last and that in my opinion is not fun, if there's no "what will happen" involved. Enough about the AI and whatever. Lets talk about what else to improve. There are some sound effects in the game which help it a lot but some sort of a track would've been nice. And the graphics aren't to die for. Now, i understand that time is a thing and maybe i'm asking too much, but i think a week is sufficientto make a decent game. But hey, nice try. Hope you take all i've said into consideration. Kudos!

Hi, I genuinely appreciate your comments, thanks for taking the time. You're absolutely right in what you're saying. For me these game jams are a way for me to explore new ideas (good or bad) that I wouldn't normally consider but also to help get over the nervousness of submitting projects for everyone to see.

I have learnt a great deal from this entry, and the points you've raised all help with my learning and understanding.

Nice to hear that i can make even a little change. Don't worry tho, its natural. For me the first game jam was the Community Game Jam, you may have heard of it. The game i submitted was my first game and the jam had like a thousand participants. You can check it out, it's pretty bad tho lol. Hope you keep doing what you like and i think your approach is valid and tbh that's what game jams are for. To challenge yourself and test out new ideas, game engines and workflows. After all its just a game jam, no one is gonna kill you if you don't submit a game or if its not good. People i've met online in my few months were very friendly and i hope you get to see how limitless the world of game development is. Its impossible not to be overwhelmed, but you'll see that it's all about being you, making games you wanna make and challenging your talents or skill. Have a good one. Cya! :)

A great idea, but I had a hard time figuring out what was going on. A percentage meter or some sort of UI telling me the health of the habitat would probably help me know when I should introduce more predators vs. when to lay off.

Hi there, thanks for the comment. This is a really good point, thanks. I did try to incorporate a visual indicator with the changing colours of both the insects and the predators but a percentage meter is a great suggestion.