WGJ 107 Theme: 'Don't Touch It!' --- Melody's memories have been fuzzy lately... I wonder why?
Submitted by ShibeyFaceGames (@ShibeyG) — 11 hours, 26 minutes before the deadline
Add to collection 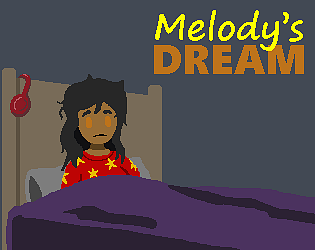 Ace of MapleSubmitted2 years ago(+1)

The art was cute but the gameplay could use some work. I felt the movement felt wrong, somehow too fast and too slow at points. I didn't understand what was chasing me or why I was bouncing off of clouds. I liked the idea of the badguy going into your dreams but I have no clue who they are (Or if they even are the badguys) or what most of the story was about. Other than that the text was extremely difficult to read due to the font and color choices.

Hey there! Thanks for checking out my game :)

Glad you liked the art! But more importantly, thanks for your honest feedback, I appreciate it. This was a bit of a rush job, so I knew the gameplay was going to be weak. (Though I actually got to bed at reasonable time for once, so it was a fair trade-off for me, haha)

Your comments about the story, setting, etc are quite helpful. When I started doing weekly game jams, I got the idea early on to make them all part of loose continuity. This one (#11 in the "series") is the first to stray pretty far from the "main" character, so I knew it might be a risky direction to take. I suppose I've been taking for granted that people might click my main page and check out the other games to see what's up. I'll definitely have to consider going forward how to keep this theme going without totally alienating new players.

If you are at all interested, please check out some of the other games in the series! (https://shibeyfacegames.itch.io/)  "Escape from Magic Reform School" and "The Mistwood Rail Incident" are probably the most complete and polished.

Thanks again for stopping by!

LikeReply
Ace of MapleSubmitted2 years ago(+1)

I’m really glad that you are already taking steps to improve. Game design is not easy. Maybe if you want to keep this shared world thing create a brief overview of the world at the start of each game and then about anything connected to the story.

That's a great idea! I'll have to make some kind of "story so far" open template... thanks for your continued feedback :)

LikeReply
Ace of MapleSubmitted2 years ago

Anytime! We new designers need to look out for each other :)
Actually, would you be willing to play my game and give me feedback? It's called purple

Of course! I'm planning on checking out some of this week's submissions tomorrow evening, I'll be sure to try yours out!
I like your avatar btw! Super cute.

Thank you. I drew it myself! I like yours too

For one thing, the art. Fucking bombastic. Everything was so nice looking and from what I could see, it looks like you did it all yourself!?!? How?

The movement was weird but strangely intuitive and easy to get used to.  It was a very fun shock when I first saw the warlock flying at me.

Speaking of which, that part of the opening was so cool! I loved the way he appeared and how the sound effects just drew louder and louder until it just cuts to the game.

The game's short, but with art like this, who gives a fuck?

I do have a few things that could be improved.

- The writing. I understand that when people go into game development, nobody's thinking "I can't wait to use and hone my writing skills!" I also understand that the novelty of putting text in a videogame can make it seem better than text that you just wrote down. But still, it could use some work. I'm no writer myself, and I don't have a good enough memory to cite specific examples and how they could be improved. So I'll give you a big and vague "Work on it."  and maybe a "Do some research to see if that helps."

Also, microscopically small nickpick, I feel like the shooting stars occur just a bit too often. It think that they would be more special if they only occurred every once in a while. This would probably just take a small tweaking of the numbers.

Anyways, the art and programming seems to be perfect from what I found. This is a remarkably solid game on all relevant fronts. The only problems are the small ones I just mentioned, and they only concern stuff that really isn't too important to the core gameplay.

Hey there! Thanks so for trying my game! Also, thank you for all the kind words, I'm glad you enjoyed it! :)

Yes, I made all the artwork! In two rushed evenings, haha. If anything, the gameplay and length suffered for it. As for my secret, the key is to keep it simple! I come up with and idea more or less of how I'd like it to look, and then crush it all down to a 320x180 resolution. By limiting myself to such a small canvas, I find it easier to quickly build sprite assets with a decent amount of animation. I do occasionally use tricks with various software, such as Adobe After Effects, to speed up the work. But the majority of the art is just made in Photoshop and PISKEL. I also do reuse assets that I've made, but this game is actually 100% fresh, save for the thought bubble screenshot on the "Win" screen. (And the "Next" button)

It's also silly, but I'm really, really glad you liked the opening! It was kind of a dumb thing to focus on for a game jam, but I got the idea and wanted to see it through. It was also intended to help "link" the sinister character to the "blob" in the dream... i may go back and add a visual link too...

The controls have been getting mixed reviews at best, haha... but glad they worked for you!

As for your critiques, I'd never claim to be a writer! I can only hope with practice and feedback I'll improve. If i ever made a large game, I'd probably hire my sister who's a professional editor to bail me out, hehe. But I'll definitely work on the writing as I go on. Personally, I don't like doing big text dumps anyway, but it's all I had time for :(

Thanks again for your feedback! This game is actually #11 in my "Game Jam" series... If you are interested, check out some of the others at https://shibeyfacegames.itch.io/. Some are better, and some are worse. But they're all set in this "storyline" so they might add a touch of context.