Game about getting Journie and Griffin together from separate parallel universes together! Made for Untitled Game Jam#26
Submitted by ThePotatoSack — 4 days, 11 hours before the deadline
Add to collection 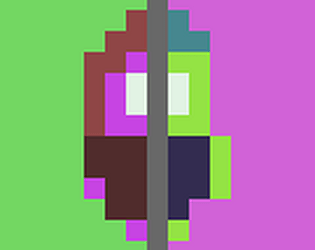 There used to be a game on the Internet called World's Hardest Game and this gave me flashbacks to it. Switching between characters was interesting, although it would be really interesting if they could interact somehow - maybe a level on Green's side unlocks a bridge or a door on Purple's side.

It took a few tries on levels with narrow paths as one small mistake means both sides have to restart, although that could be due to the fact that I'm bad at games.

Overall a nice, easy to play game which brought a few minutes of fun.

Thanks for playing my Game! Yeah when i was first working on the game i quickly relized it was similar to the worlds hardest game and i went with it! nice ideas, i think ill work on that in the future maybe!

Pretty interesting game! I really like the look of this game. My only complaints would be the music is quite loud and it would be nice if there was an easier way to switch between the characters.

Thanks for the feed back! ill work on that!