An Absolute Cattastrophe.
Submitted by fey.earth (@k_mckenzie) — 2 days, 19 hours before the deadline
Add to collection 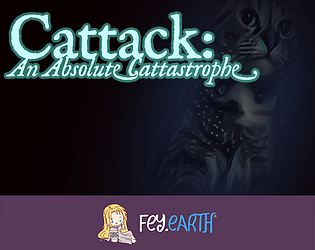 Beautiful! Simply beautiful! We had a lot of fun in the chat, you can check out the VOD: Twitch We played your game last!

Cute game! The player character is such a cute sassy cat, and the cat sound effects definitely helped give the little one some of its character!

There's some small polishing issues, but for a 9 hour game jam, the visuals and audio are really nice! The cat sprite is a simple wireframe, but I liked how you picked a line color that matches the overall color scheme, which I think is a clever solution to creating visuals in a limited amount of time.

The story was initially quite funny to me, but the humor grew a bit repetitive as more cities got bombarded. I think that instead of repeating the same kind of jokes a couple of times, it might have been better to go for a shorter, more impactful, storyline.

Overall, I really enjoyed your game! Kudos to you and your team!

Thank you for the feedback! It's super helpful!

I guess I must have missed something as in the description you say it takes around 10 to 30 minutes, but after around 5 minutes I had seen the "international story line", and if I load that save game again I'm just taken back to the main menu. I also found a present.

From what I've seen I can say the humour it not particularly my cup of tea. Even considering an "evil cats try to take over the world" backstory to me it's a bit far-fetched that a cat just gets into a control room for nuclear missiles and is able to lock out all personnel. I'm not saying you can't create a setting where this makes absolutely sense, but from what is presented to me in the game, I'm just not convinced. Put it some more backstory, or better yet, include a playable prologue where you have to sneak past the guards or so to actually get into the room.

Gameplay wise it becomes repetitive rather quickly, so some variety would be neat. Maybe it would help already if there wouldn't be just plain buttons that all look the same, but instead have some kind of screen where you can chose from a list of targets, but the cat can't read and sees just some (different) garbage as button labels.

The international story is the same game with different text. We only had 9 hours to complete the game, and it was our first game jam, so it's bare-bone...we learned a lot, though!

I looove the idea of the prologue. I also like the idea of making a confusing control panel appear. I'm going to share these ideas with my husband and see what he thinks, since he's making the sprites. I'd like to update this game; I think we can pull off these cool ideas.