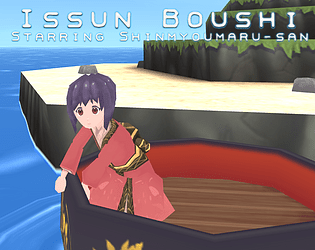 Lovely art! I included it in my Touhou Jam 5 compilation video series, if you’d like to take a look. :)

NOTE: we updated the game with a much improved POST JAM release, when rating for the jam, please rate the original version and NOT the post jam one!

Managed to climb up the steep slope on the first island by jumping at it, then spamming the needle attack while I'm in the air :^)

I see that you handle character steering strictly using the directional keys, I personally like a combination of directional keys + camera look direction when moving so I can move around in the air by pointing the camera rather than pushing keys.

On the mini island that you get to first using the parachute, I didn't like how the coin placement forced you to drop down and gave no reasonable escape without falling into the water and resetting.

The rocks acting as an indicator of where to go in the dark tunnels is pretty clever, though the inaccurate lighting in those scenarios made this instance of the technique less immersive (use glow stones instead perhaps).

Overall loved, the whole thing, especially the level design and art, impressive how much could be accomplished in 72 hours!

This relaxing 3D adventure and its chill BGM helped heal me from the jam stress. :)

Submitted
Dance of the Poverty Gods
LikeReply
Gman8rHostSubmitted1 year ago(+1)

Simple and lovely with a very impressive scale! Honestly pacing-wise this felt perfect and I'm shocked. Nothing overstayed its welcome and the progression of getting items was super fluid. Also the coins were never in terrible locations that made finding all them a pain which i was worried about. The music was nice, maybe a tiny bit repetitive over a long playtime but the battle music added some ncie variety. Maybe a couple more enemies on the overworld would've helped too, so the platforming and combat weren't totally separate most of the time.

I'm very impressed with this.
The idea of a Plattformers with Zelda-Like Item Progression is pretty neat and I wish I could see a full game of this. I only had a few minor problems, like the hook being pretty counter intuitive, I didn't like the music as much (it was a nice touch though, I understand how difficult it can be to make music in that short of a timeframe at all) and I didn't really feel (small), as much that everything else was super-size. All that is just nitpicking though, because this is a really solid submission of a gamejam.

I don't know how you managed to create a perfectly balanced 3D platformer in no time but this is very impressive.

Can't add much that hasn't been said already besides to say that the music is lovely and gives the game an extremely chill vibe (which helps you not to get mad when you screw up a jump).

Like Guessy said your team is absolutely nuts making a wind waker in 3 days and it's all well-designed with beautiful graphics.

Jump needs some time to get used to but overall control is smooth and every single mechanic in this game works perfectly -- cap, hook, attacks -- they all worked as intended. I never get stuck or get confused about anything. For this kind of games is quite common to respawn at a dead location and the player had to start over, but it never happened in this game. I respawned as I expected every time I dropped into the water.

Skybox and textures in general are simple but pleasant just like wind waker. Shinmyoumaru and her bowl look very detailed in low-poly.  Music here is soothing as well.

I haven't played through everything yet but if I have to choose the best game in this jam right now it's definitely going to be yours.

Sorry, but the browser does not allow the file to be downloaded. He believes it to be a virus.

I managed to beat it! Loved it, it's incredible what you did it in the limited time of the jam, it looks and plays so well. The level design is fantastic and I had fun collecting the coins and getting the treasures. Also I'm impressed by the Quake FTE engine it fits this game so well.

platforming controls are rough and there's not a whole lot to do but it's still undeniably impressive for 3 days. the cloth and hook are real fun to use together, would've almost liked to have gotten them sooner and had more of the platforming based on those mechanics

You... you built an entire windwaker / metroidvania-lite in three days. You literal madmen.

Complete with abilities, vehicles, enemies, the works. The levels make sense, the visuals are great and the controls are functional if a little quirky. For the volume of work compared to the shortage of time though damn, you did excellent work. The second island is a wonderful 3D maze and figuring out how to traverse the other islands was a fun bit of puzzling.

Controls were a little quirky, and having tried my hand at 3D platformers before a few are pretty familiar:

- You can 'hang' on ledges (jump up at a ledge and if it's at ~roughly twice the jumping height you can 'hang' there in the air state without falling). It's generally worth using some collision detection whilst falling to clamp velocity / block input against walls to avoid this kind of situation.

- Moving upslope makes you speed up, and travelling downslope at speed can fling you 'off' the slope into the airstate; try projecting your movement vector on the ground plane so that you move on the current ground slope rather than the global horizontal plane

- There's a bit on the second island were you have an impassible slope right up against walkable ground, so if you run into it you go into the air state for a while and slide back down, often directly off the little platform. Catching those cases every frame is always kind of a sod, so the best advise I can give is to just avoid those situations in your level design.

- With how tight and small some of the platforms are a little bit of acceleration to the controls would have been appreciated; currently you tap wasd and move full speed immediately and its kind of terrifying

- With the cave/teleport transitions; stopping input when you pass a transition would be greatly appreciated (ie treating it as a 'button up' event so the player has to re-press the input again to start moving); again with the small ledges leaving a cave can get rather perilous.

Some feedback when you pick up an item; a message with some text on how to use it would be nice. I did check the controls in the options, which let me know about the sword and hook but I missed the parachute and didn't initially know how to use it. At the top of that tower with the smaller towers + wood beams in the distance, I initially wondered if I'd grabbed the hookshoot (I thought it was a metal bracelet thing at first, not a parachute) and kept trying to 'hook' to the beams instead of float to the towers and use the beams to get back.

There's that flat island with the crabs when the final platform is just a touch too high to jump. If it had been raised a little higher things could have been clearer; I kept trying to figure out what I was supposed to jump on to get up there on the local island itself, assuming the wooden target in the distance was where I supposed to go next. Oops.

Still though, this is a ridiculous amount of work for the time given and despite my critique above I loved it. Combat was a little 'eh' (you can poke crabs into the air and stunlock them to death) but the platforming was golden. I can't imagine how much work it took to complete this entire thing in three days. Kudos to you, get some sleep and please caffeine responsibly.