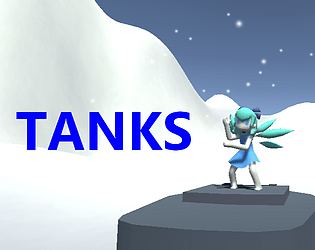 The controls are slippery and it can be difficult to aim at times, but I love the concept of this game. The models are also really well done.

Can't say I knew what to do as a goal but it was fun to play around with Touhou tanks! They're definitely slippery in the control department though. Can the enemies even die? The distinct lack of feedback from that left it pretty uncertain what was happening whenever you were on the offensive.

Anyway I liked the little wobbly tank animation, there was enough attention put into most of the details that it came out really polished and fun-looking.

Yep, the enemies die - there's an explosion sound effect that plays when they do, but I inadvertently made the audio source for it on the tank ones functionally inaudible while fixing a bug with the engine noise last-minute (and didn't test killing them again till after submission oops).

Almost forgot how annoying it was to control vehicles without a proper steering wheel, but damn holding A/S for more than 2 seconds is punishing!

Aesthetics and sound were pretty slick though

Has a functioning quit button, +10

Really cool concept, I laugh at Cirno dancing, and the music is pretty cool.
But the gameplay is a hard to control, and I don't think (or at last I didn't find) the game have an objective yet, I needed to kill myself to buy other characters, I don't even know if there is a difference between them other than the cute models.
play around with the physics and see the enemies bug and spin around was entertained

Slippery snow is slippery. There wasn't any particular mission goal (besides, kill all enemies?) so I treated it as a bit of a game of exploration. The excellent visual assets kinda warranted that. This can definitely be used as a springboard for... something.

I'm a sucker for tanking games, so I love the concept, but the tank itself is wildly uncontrollable (simply stopping too quickly is enough to put it into a 360 spin) and appears to have very little weight, the camera best I can tell is to glued to the turret (so if the tank goes into a spin - which it will - so too does the camera; it gets pretty nauseating) and the AI seems... well, braindead. They spin around in circles and sometimes remember to shoot you. Also not clear is the mission goal, leaving me driving around Hakurei Shrine 1 in circles trying to figure out what I was meant to do exactly until I eventually gave up and quit. It can be hard to tell a dead tank from a live one too; the only real observable difference is that the former doesn't spin around in circles constantly.

On the other hand, Cirno in a chibitank getting airtime and mad drifts is pretty spectacular to watch. The map is well made (disappointed you can't ring the bells by shooting them, but can't complain)

Audio works, though I couldn't tell if the 'donk' sound from hitting something was inferring a good hit or a shot bounce. Did like the music though.

No Story/Writing I encountered; similarly the LGBT theme appeared to be absent.

Challenge existed mostly in trying to drive the tank in any direction not directly forwards, versus actually shooting anything / avoiding being shot.

All in all, seems to have been a victim of overambition. Rather than crew choices and multiple maps, more time tightening up the controls and gameplay might have been wise.

EDIT: you also lack a pause screen / way to quit the game if you're not playing it windowed. Little important that.