In this visual novel, find the computer virus before it destroys the computer's memory!
Submitted by nhahn — 14 hours, 42 minutes before the deadline
Add to collection 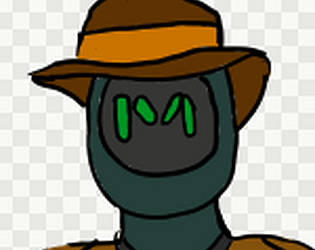 I REALLY loved the idea of this game! Also the puns were hilarious, I'm always 100% sold on a game that has A+ puns. Loved the silly notes on the background art - those tied in really well with the mood of the game, intentional or otherwise :p I'm also a fan of using Fungus in Unity and I thought the way you used it to create a VN with more complex mechanics, like being able to scroll through a scene, was really cool! I do think collecting "cookies" and "tabs" could've been a little more challenging, and it wasn't super obvious that some elements were clickable over others (like doors, characters, etc not having visible mouseover states like the UI buttons did), but it was still a fun concept to play! If you all ever decide to make a full version of this game someday, I'll definitely be looking forward to it <3