Capture the pervs
Submitted by Nekolag — 12 hours, 54 minutes before the deadline
Add to collection 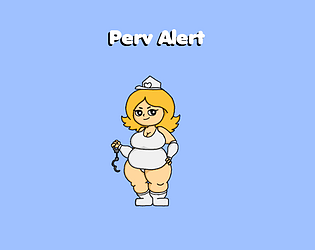 Nice game. I had some difficulty with the controls though, especially since I'm used to using space to jump.  It also took me a while to realize I couldn't shoot the pervs, but I had fun kicking them nevertheless!

Well, given how those pervs were exhibiting themselves on the streets, I believe that the punishment was appropriate. From the moment I started playing the game, I can tell that a lot of love was put into the sprites and animations of the characters, as well as giving some sort of extra personality to the main character through the artwork at the end of each level which is commendable. The enemies that you encounter are also pretty creative given the thematic of the game and I think they really help sell just how exaggerated the setting of the game is.

Regarding platforming, I do have to agree with some of the comments bellow. For a good part of my playthrough, it felt like the controls and physics could definitely be tweaked to be made tighter and even more satisfying to play. While the game did introduce some interesting platforming twists on the later levels, I also believe there could be a lot of more unique spins taken with the platforming genera and formula, especially given the nature and setting that the game has.

Given how you plan to make a full version of the game as said in the end and on the game page, I believe that you already have some ideas and plans to make those tweaks, and I can see something really original coming out of a full-fledged version of this game with given time. Here’s the best luck for that! Cheers! 🐳

Thanks. I have some ideas for the game but it will take time.

Pretty fun. Controls are a bit wonky in places (I found that I had to hold the keys down for longer than usual else it wouldn't always register), but still pretty enjoyable to play. Some key that allows you to drop to a platform below you would be good.

Also, whilst I get the whole putting males as perverts thing, it can send the wrong message. It'd be good to have a mix. (something something politics something something male rape - I'm not trying to look into it too much, but others might, so I think it might be better to nip that in the bud).

Yeah, I agree that there should be lady pervs too.

The premise of being a Rubenesque avenging angel on a motorbike saving women from perverts by kicking them in the balls is too wonderful to put into words :) As far as gameplay goes, it's a bit slow but good for the length of game - it starts to get more exciting on the last level with breaking through walls and so on, and having a higher pace like this would help keep the gameplay interesting! Hope you continue this :)

Haha ok so out of all the entries, I've so far had the most genuine fun with this entry, congrats!

Thanks. I wanted to make a funny game this time.