She can't wrestle, but you should see her BOX!!View game page 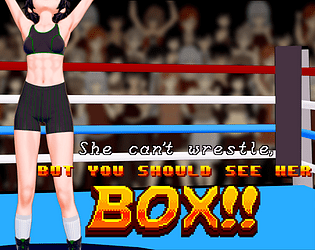 She can't wrestle, but you should see her BOX!!'s itch.io page

I liked it enough that modded my own version of it to add a 'Hard' mode, with a bunch of tweaks and surprises to accentuate the different fighting styles, and make some moves riskier.

I like it a lot, but i would love to customize her or even play as the other characters!

Don't see much ryona around here, also didn't expect a game like this out of renpy. Glad you put in a strategy guide too but I'm not sure if I like what beats what. In boxing I'd think a jab would beat feint since you can throw the punch pretty quickly, strike beating jab since it's like a cross counter after a jab, and feint beating strike since you make them whiff their cross because they think it's a jab.

Pretty good game and I like the anime models.

Well this was a very well put and interesting game! I really liked the amount of content (13 characters all with different sets of clothes) and mechanics that were put on here. Even if the game was mostly RNG based, the inclusion of the rules and the prediction system in the matches actually made it pretty enjoyable without leaving the player completely up to luck.

I really like the attention to detail as well. Like I said, including 13 characters was pretty well-rounded and even including different music tracks for all of them was a pretty nice touch. I unfortunately wasn’t able to beat Mesmeralda, but I really enjoyed how much of challenge she and the last fighters (including the original championship match outside of championship mode) put up.

I think this is the highest I’ve rated a game in stealth so far. The inclusion and possibility of toggling the naked more on and off at any time actually makes it very nice and while I know some people will probably only play it with it turned on, I do like the difference sets of clothing as well.

Overall, this is a really nice job and game! On a side note, I am pretty technically surprised this was built on Ren’py, but I guess in the end it’s the developer that makes the game and not the tools. Cheers!  🐳

You said you didn't have any good ideas, but naked girls is always a good idea :D This is great, the amount of graphical assets you had to make for all the fighters is really impressive, and the gameplay mechanics were easy to get a handle on after a couple of matches.

The UI seems to be a bit more confusing than it needs to be - on the left, I had to keep reminding myself that the actions on the right were mine (even though my character is standing on the left of the screen).

How do I go on a date with Texas Rose? :D

Wow, I just discovered the secret opponent and the game gets REALLY interesting at this point!

>on the left, I had to keep reminding myself that the actions on the right were mine (even though my character is standing on the left of the screen).

A fair perspective. The move history (like the move predictions) is ordered as action->reaction, and they're color-coded as well (red for opponents, green for player, gold for whoever happens to be champion). The player being on the left is just a general convention (see in particular most 2D fighting games). I hadn't really considered that the positions clash somewhat.

Really enjoyed it, super fun to play. Wanna give me a hint on the mystery opponent? :p

She's only interested in challenging champions, and only if they play by the rules.

I couldn't think of a good idea for Strawberry Jam 3, so instead I made a Rock-Paper-Scissors style battle game about naked women hitting each other. The naked part is optional, though.

If you get stuck on a certain opponent, and don't want to use the built-in cheat mode, feel free to read the included strategy guide.

If you beat the game without getting stuck, congratulations! Give the strategy guide a read, anyways. I spent, like, entire minutes writing it.

Also, I heard a rumor that there's a mystery opponent hidden in the game. Let me know if you find her.