Defend Base N from being raided by an army of droids!
Submitted by Cratmang (@CRatmanG) — 2 days, 2 hours before the deadline
Add to collection 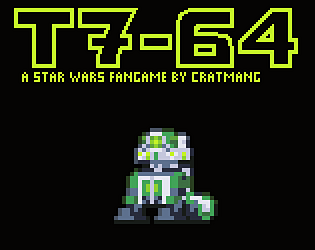 Is this your first game? Game jam? Did you learn anything new? Tell us about your time making this project.
This is not my first game jam. I had some code from other (discarded) games that I thought I could use. While they did serve as a good base, I don't think I really saved that much time in the end.

How many womp rats did you shoot during the making if this game?
I wasn't keeping count, but more than a few, mostly out of frustration, a few because I lost focus. Let me just... *rolls die* ... Yeah, 12 seems like an accurate enough number.

At first I didn't get what to do but I quickly figured it out and when I did it was a very enjoyable game! The biggest issue I found was with the balancing. I felt I didn't get enough scrap to repair myself between waves.

Nice work. The droid is adorable.