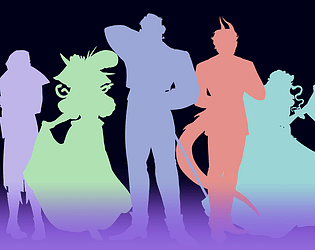 Log Line
Flirt your way through solving a spooky mystery!

This is obviously a project in an early state of development; I'm assuming "sounds of paper tearing" etc aren't going to be in the final version. You're setting up what feels like it's going to be a really fun murder mystery--the big mansion, the cast of colorful characters who all obviously have their own histories and secrets with each other. I definitely like the character designs. Too bad we didn't get to see it in a more complete state!

The gorgon and the banshee had really nice designs!

To give some serious feedback, the game has a strong sense of visual style and I quite liked the artwork for the different characters.  The background in the house was also quite cool and the music was nice.  I was disappointed that it turned out to only be a demo, but I understand that's likely due to Jam-related constraints.

In terms of narrative, the game would benefit from having a stronger introduction.  I was disoriented by the opening scene, since we see a grassy road but we get dropped straight into the middle of a conversation between a pharmacist (the protagonist) and an unspecified male voice who seems to be the pharmacy manager (why not just call him that? "Male voice" sounds like I don't know who he is).  I assume the background mismatch was due to time/resource constraints, but it would help to have at least a basic opening line of text to let us know the context of who these characters are and where they are.

The opening line is just, "Where's that?" and I'm still not entirely sure what it's referring to or what it means.

Great work on this demo so far, and I'm looking forward to seeing this get finished!

Submitted
The King of Cats
LikeReply