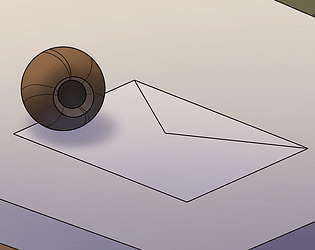 Content Warnings
Whilst this game has no blood or gore, the monster itself does have mild body horror elements. Despite the name of the game and possible in-game implications, there is no visual or mentioned eye trauma.

Definitely had me second-guessing whether I had done all the right things! The monster is so enigmatic and I like that we learn so little about it. Would have liked it to be a little longer though.

Submitted
The Wolf of Derevnya Demo
LikeReply
Ghost117 days ago(+1)

I really enjoyed playing this! I played through and got all three endings; I loved the art style and character design, as well as the monster's design. I like how you had to remember what to do and which bathroom to use as well! Would love to see this as a longer game! <3

SPOILER: Oh, it's nice and quite scary~! Not that "intense" scary though but I feel the fear of living in new space and then have to deal to supernatural thing, I braced myself for the scare but thank God it's not that scary.

The monster's design is so cool too! Rather than being spooked, I was marveling at it wwww

One thing that really bother me is the font size for the dialogue text is too small. It's nice the quick menus have big size and very easily read (Ren'Py's default quick menus' font size is too small for me, nice job making it bigger) but the actual text that player need to read is too small and thin. Other than that, I really like this game with it's almost laid back tone horror. And have I said I like the monster design? Because I love the monster design <3

Thank you so much for the kind words! It's very much appreciated :> I'm personally someone who is very hard to scare, so I tend to lean into the more 'unnerve' aspect (or as you worded it, laid back horror) than sudden jumpscare accompanied by a loud noise. And even if I fail at that, I hope my designs can be interesting to look at at least!

Ah, the joys of me having a large screen and not being able to properly gauge the size of the text lmao. I will be sure to fix that when I have the chance! Thank you for pointing that out :>