Submitted by Will — 3 hours, 26 minutes before the deadline
Add to collection 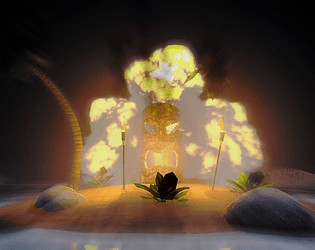 The flame looks amazing, and the way you have it flowing out of the tiki head looks really effective, no jankiness from the looks, really nicely polished effect!

aww thank you. Houdini flipbooks are super effective :p its a shame i only found out you can export vector maps and normal maps the day before the hand in :s thank you for your kind words and i wish you the best of luck in the contest :D

Really unique concept - I think you did a great job with the lighting (Nailed the cover image too!)

Cheers bud. really appreciate that comment as i spent alot of my time trying to get the lighting working :)