There is something on your computer, and it's NOT a virus.
Submitted by chiropteram (@chiropteram) — 8 hours, 23 minutes before the deadline
Add to collection 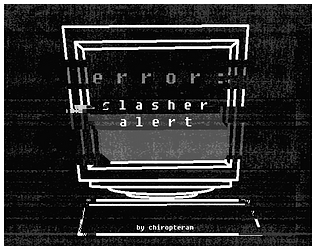 You're very creative and your drawings are beautiful (and creepy, but in a good way). You managed to create a spooky atmosphere with the mystery behind the park plus the creepy email, your idea is original. Hope to see more soon...

Thank you for your feedback, I appreciate it!

I like how you designed the game, the minimalistic b&w style is simple but lovely and the color scheme really matches with the vibes of the game! We can log into a pc while using our pc, cool idea :) I also like the pictures we took with our camera, your art is amazing and ideal for this kind of game. 10/10

Thank you for your words!

As others have said, this is a very inventive use of the RPG Maker toolkit to create something that is completely different from the norm. I like the idea of subverting the RPG maker graphics by making sprites that constitute the graphical interface of a computer. This has a lot of potential and I like how you have outlets to explore the story further through the emails and other add-ons on the computer.

The central narrative of a photographer tasked to take pictures of a park that isn't exactly safe is a really neat idea. Games that play with the player's expectations are so much fun, and having the image 'corrupt' and the sinister villain take over the computer is a great idea. I hope you continue to explore this idea further as it lends itself very well to an extended thriller/horror narrative! Great work.

I think feedback wise, it would be good to shake the game up with some more dialogue or interaction with characters outside that of the computer, but that's obviously a matter of scope and ambition.

Thanks for submitting Error: Slasher Alert to the SCREAM LITE jam!

It was my first time participating in a Scream Zone jam and I really wanted to add the optional theme, so having the character being unsafe because of their boss was how I managed to integrate it in the game.

I had a great time working on this project. Time was a bit tricky but I like how things turned out :D

I hope you look forward to part 2! There will be more interaction (with the villain as well), more apps to explore and definitely more lore!

Thanks again for your words and for hosting this jam!

There is only the end on the email.. or I miss something?

Yes, there is only one ending (yet), so hopefully you didn’t miss anything!

Really cool concept and creative use of RPG Maker! It's got a good art style too.

Submitted
Sweat Like Drops of Blood
LikeReply
chiropteramDeveloper2 years ago(+1)