Submitted by The Frozen Team, Lehomar2vinci (@nathchambrtte) — 1 hour, 10 minutes before the deadline
Add to collection 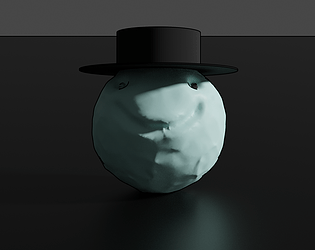 Nice game. I really like the aesthetics and the different themes integrated on it.

Really cool concept! I like how the different environments have different themes to them, and I think this was a very unique take on the climbing theme. The game does seem to break on the fourth level, but otherwise I think it's a cool game (no pun intended)!

When it comes to aesthetics and sounds, you guys get high marks across the board! The player character is a bit of... well, a character (he looks like if a blobfish made a baby with a snowman and put Walter White's hat on it!), but the backgrounds are mesmerizing to look at. The music on the main menu, as well as the tones that play when you progress from node to node, really put me in a good mood too.

I think there's more to be desired from the gameplay, though, since it's pretty simple to type the letters and progress upwards. It'd be really nice to see some combo multipliers if you get a number of right keys in a row, since you can kinda spam the keyboard without much consequence. Or maybe you have multiple routes of nodes you can have the player choose from, and either those nodes have different instrumentals or they lead to some cool collectible or something!

It did feel a bit unfinished overall, especially when the last two levels were having issues with the player character glitching after the first key press (the 4th level eventually let me bypass this after a few tries, but the last one was consistent). Still, this is really impressive given that you guys completed it in 72 hours, and it looks like you have plans to continue developing it based on the "Coming Soon" features. I'd love to play it in a couple months and see what you guys did to improve it! 😄

[Lehomar2vinci, sounddesign] : i really apreciate your comment, looks truely sincere ! We had some troubles with github just before the deadline and we had some bugs to fix at the last minute and not all unfortunately (like several people i think durring gamejams), before compiling. ^^

I will also write down your ideas which sound interesting, it might be cool to implement that!

Indeed , as you said i hope too this will not be an abandonware :P

Thanks for your comment and have a nice day ;)

Oh, version control... I've had things get messed up during very important milestones in the past that weren't even an issue before, just because Perforce thought it'd be a great idea not to include some files. Totally understand that feeling. 😑

But that's great, glad that I could be helpful! Sorry for all the typos before, I wrote it really early in the morning 😅

I'm sorry to say it freezes to me. Once i select the level it gives me a black screen :( . Really nice main menu music tho!

have you try to set the quality on "Low" ?

And thank you for the main menu ^^

Submitted
Wrath Of Sisyphus
LikeReply
The Frozen TeamDeveloper2 years ago

Pretty cool concept! Like the idea of blending sounds with the button presses. I think the gameplay could be even more engaging if the player had to press the keys based on some rythm (just an idea). The only problem I noticed with it is that I couldn't get past Niv 4, because it keeps glitching out for me. Other than that it's pretty good. Nice job!

A fun little game! The sound design is also really nice, some better menu navigation would be better though or an endless type mode where you go for as long as you can with a certain amount of lives.

Very thanks for your comment and rating I hope so  !