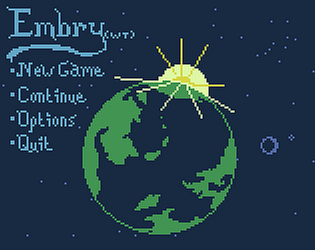 From The ChasmSubmitted307 days ago(+2)

Hey! I really enjoyed playing this. The tactics involved became really interesting. Using guerrilla manouvres or using the planets like corridors, becaming essential to whittle down the numbers. I felt the emergent part of this game was great. I didn't see so much of the story, but I liked the look of the characters. I would have liked some more explicit intrustions; it was a bit disconcerting being dumped straight into a battle. I felt having the planets being the same colour as the enemy ships was a bit confusing, as was some of ui. Differentiating in the colour or symbols would be beneficial. I couldn't quite tell what I was upgrading or repairing.  I liked getting the salvage! And winning the battles was satisfying.

Submitted
This Way The Briggle Comes!
LikeReply
Clairvoire312 days ago(+2)

The strategy involved is surprisingly deep, and the sound design got that Crunch