A fantasy RPG for people worried about reaching their destination.
Submitted by Mist (@mistodon) — 10 hours, 22 minutes before the deadline
Add to collection 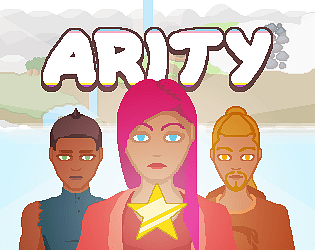 Did you use any diversifiers?

I allow my game to be used for promotion material for future gams jams / events by the organisers.

you may use my fame for any future promotions.

It's a very well-made game. I feel like that I had a long journey after finishing the game. It's an usual story.

Great work! I know a few other people have said it, but I have to agree the felt felt really polished, great work with that.

All the art looked great and the gameplay was really fun!

Especially the puzzle-esque battle system was a lot of fun and with a bit more variety I can see it work really well in a full game :)

Submitted
There's a protest in town ...
LikeReply
definitelymangoSubmitted1 year ago

what a Fantastic game!!!! im astounded by how well put together this is - the battle mechanics, the dialogue, the story, the art, amazing work!!!!!

im in love with the battle system! it feels more like a puzzle than anything, it's fun to think ahead and figure out how to deal with all the upcoming enemy moves, and it was so cool to see that spin on its head at the end, what a treat!!

the story was beautiful, i really like the body swap trope with a trans lens! how refreshing!

amazing work, i hope you're proud of what you've made!

I literally started tearing up at the makeover scene. Really well done. I like how it was clear at the beginning that *something* was up with our characters that wasn't being directly spoken about, and that narrative just slowly built up over time. The different expressions used for the characters also really enhanced the experience, and man, the dialogue's text itself told a story with the speed of text!

I also really liked how the combat also matched up with the stereotypical gender roles, but in a way that makes you actively question vs. just falling into a trope. Like being a tank could be seen as more masculine and healing more feminine, so when these roles are forced on you via unexpected body swapping, it just contributes more towards their comfort/discomfort in their current bodies and living up to societal expectations.

The combat mechanics were also interesting, like someone else mentioned, almost more like a puzzle. The hints in the dialogue for the beginning levels were well done and very useful.The snowmen almost got me, though, as I had to restart several times!

I ended up having to quit shortly after jumping down to the next island, but I may yet come back to finish later!

I'm trying to think of anything more along the lines of constructive criticism, and it's hard XD. Like, maybe the text sounds were a little on the loud side compared to other audio? That's it. That's all I have rn. 😂

Ahh sound balance, my true nemesis… But really, thank you for your lovely comments! I’m so glad to hear that you picked up on the stuff I was going for, and that it landed properly! The goal really was to have the player build preconceptions about these characters based on how they look, and then twist them around. Relieved to hear it worked narratively!

Anyway, thanks, this was lovely to read :3

Awesome! Like the idea of combat being more of a puzzle, and the narrative was really absorbing! Crazy you fit all this into the time given :D

Wow this is awesome! I started playing this not realizing how long it was, and just found myself reaching the end around 2am here. It really kept me locked in the whole time. The story was amazing, and I loved the way you used music (and especially silence) to punctuate emotional moments. Really felt this one!

It looks polished, I liked the graphics and music. May I ask which game engine are you using? I was unable to pass the first level, the enemy always throw a Boulder and defeat my character.

Wow. It is a very polished game for a game jam. Storyline is great. Combats are interesting. And i loved the ending "fight" <3

Really glad you liked the end! I was so excited to make that part so I’m delighted to hear other people appreciating it too!

Really impressive! It's an interesting combat system and I like the tutorial text at the start of the first few combats :)