Submitted by sipio6
Add to collection 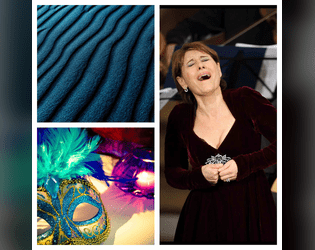 a very nice story idea, keep up the good work!

Submitted
The Parable of Two Swordsmen
LikeReply
small_grey_owlSubmitted155 days ago

So you had me intrigued right from when I saw your moodboard feature a singer so prominently, and I wasn't disappointed in that area. I think this was a good use of an unconventional weapon that also fitted quite nicely into the theme and concept of the faction you chose to highlight. The story's grammar was very rough though, and could have benefited immensely from further passes for clarity. Your framing device of a TAO Coalition spy report further highlighted the grammar issues; I would expect TAO military communications to be very efficiently-written, without the descriptive flair and editorial asides the narrator used. Overall the idea was nicely creative, and I hope you can work on the presentation to really let your story's strengths shine through.

The idea of an Elven Jester using song and tonal frequencies to control the sands of the planet, and the havoc it causes against the opposing human forces, is a really neat unconventional weapon.  Unfortunately, the structure was very difficult to follow due to the lack of periods and grammatical issues.  Based on the "copia" in your document title, I suspect English is not your first language.  I applaud your efforts to not only write a story, but translate it for others to read in 48 hours.  While it didn't work flawlessly in this case, I hope you give it another shot in the future or continue writing in Italian, as it would seem you have some great ideas to write about!

I am sorry to say but I could not read this properly. The english is very poor and the writing style thus suffers. Also sentencing is virtually non-existent, the long lines of text need to be split in multiple places.