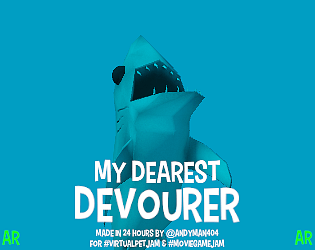 Movie scene description (plus video link if possible!)
Swimmers are out swimming during the 4th of July. Jaws, the great white shark lurks nearby... https://youtu.be/G5KSCWDlyQw?t=1m4s

Does your game or video link contain movie spoilers?

Please list any pre-made art/music/other assets that you used.
I made all the 3D assets. I used some 3rd-party music, sounds, and button icons.

Anything you want to say to players before they play?
Jaws (1975) is one of the scariest movies of all time. It is about a man-eating giant great white shark that terrorizes the waters around small town that depends on its beach for tourist season commerce. This game seeks to help cure you of the fear of sharks by giving you your very own pet shark.

This AR (augmented reality) virtual pet shark simulator allows you to bring a pet shark into your reality. Watch it swim, leap, and play hide-and-seek with you. Drop some swimmers in the water and see what it does!

You don't control the shark - it controls you. It will make you do the tango as you walk around trying to capture it in your mobile device's view port. Seriously, hand it off to someone and watch them - they'll unintentionally dance the tango if they try to follow the shark.

If you don't own one of these devices then watch the Youtube video of the AR game in action, recorded from my phone:
https://www.youtube.com/watch?v=HTa3HwsNps4

Here's what the different buttons do:

Shark button: sets the water level to a little bit below your device, and puts the shark right in front of you. Press this if the phone loses AR tracking and the water disappears.

Swimmer button: drops a swimmer into the water.

Photo button: pauses the game and hides the user interface. Now you can walk around and capture screenshots with your phone's screenshot controls (varies by phone). Tap the screen to resume.

There is no "winning" or "losing". By playing the game, you have already succeeded.

Made my Honorable Mention!

Couldn't play but I did watch the video. Super cool!!

The shark is so cute!

This just was beauty when I first saw the video. Great job man!

How exciting to see such a focus on sharks in another game! Unfortunately I'm not able to play this as I do not have one of the required phones, but the video looks pretty neat! Keep up the good work fellow shark-based game developer!