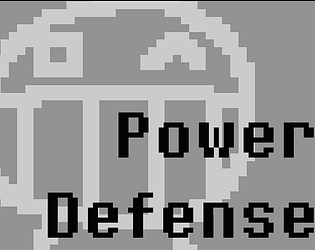 Use of the limitation
I have 5 colors. Black, White, a Light Grey, and a Dark Grey and red. I got alot of mileage with outlines

Nice concept! This one has great multiplayer potential! Really liked it.

This is a great entry! I love the idea of the avoider game included with a tower defense! Now it just needs a shop <3

Hmm I haven't really thought about a shop tbh, but I think it would be great in this game. Thanks for the suggestion its getting the idea juice flowing.

Great how you merge strategy and action in this game. Feel great the balance between the two, always on the move and also try to think the way i will maintain the tower charge and the enemies lure to them.

The controls feel very responsive and the sound design help maintain the engagement thought the game.

Congrats for coming up with this concept and finishing the Jam

Great concept! It's like a fusion of a zombie survival game and a tower defense. I like the story being told through the background art. The enemies are challenging but not frustrating. I think if you gave the player more tools, like some way to distract the enemies, you could push this concept further. Finally, where is the music?

thanks for the kind words. I like the idea of giving the player more tools  but jam times are a big meme. But as for the music it should be in there I might have it way to low though... I might have to come in and change that...

I enjoyed the game! The levels were enjoyable. The fast enemies are a little too fast imo. It was also a little awkward trying to get close enough to the fast ones to aggro them, but not too close. I liked the enemy variety. I don't know if this was intended, but on the last level, if you take a battery to the opposite tower (like take the battery on the right to the tower on the left) then it activates both towers. It might be a glitch, but it made for some interesting gameplay. Would love to see the throwing mechanic expanded to throw in more directions. Well done!

it's really cool that you found that glitch on the last level, I did actually find it while play testing and decided to leave it in as a cool little feature. I definitely need to tweak the armless guys more for sure. But jam times be spicy

I spent SOOO much time on that last level lol! Tough, but fun!

Superb entry absolutely love the mix of genres for this! The grungy aesthetic and clear character designs are really effective and its just incredibly fun. The core is really solid so there is lots of potential here for expansion on the gameplay. Very well done!

Thanks for the kind words! I am not sure if I will expand it, but I agree that there is potential here.

Very fun to play. I like how the challenge scales from level to level, forcing you to learn new techniques.

It contains the heart of an old-school tower defense game, but it's much more entertaining, because you have to run around actively keeping the towers powered.

One little thematic reservation: I'm not sure how the towers are being powered over and over by the same battery. :)

Thanks for the kinda words, dood.

I think the answer to your reservation, is that the real power is the friends we made along the way

Man, that last level was hard! I don't think I've played any game quite like this, and the execution was exceptional. The variety in enemy types kept things fresh and chaotic. The way the little runner dudes scuttle around is just a bit unsettling. Great work!

Thanks for the kind words my dood. I didn't have alot of time for balance so I am not sure how the difficulty turned out, so I am glad to hear you got at minimum to the last level

It took a second to beat, but it was definitely worth the effort. I think I died on it around 8 times lol.

I really like the concept, it feels like a fresh new take on tower defense, where you are trying to protect yourself instead of something else ! A small touch that I liked, was the fact that towers attack the enemy that is the closest to you, which gives a nice layer of strategy to the player's movement.

I think making the enemies a bit more interactable would have made the game even better, for instance, when you are surrounded, there is not much you can do. I would have liked if, for example, you could throw a battery at an enemy to push it away, to give you a small opening to escape.

Thanks for the kind words, and I think that would be a great addition! I'll keep it in mind if I make an update.

Yo’, very entertaining game, the theme was well implemented and the art style fits the gameplay nicely.

There was one bug I couldn’t manage to replicate, that made me spent like 5 min tossing the power to the enemies; I think I perfectly synced a bullet hitting an enemy, and tossing the power which made it look like I could also toss the power at the enemies to deal dmg, but either I kept missing, or it isn’t like, the “bug” was that after tossing at the enemy, I think I picked it up or I’m not sure what happened but I was holding the power but the power was offset by a lot from the character’s arms, which made it look like it was floating.

And ah yes, I know what bug your talking about. I tried getting ride of it in multiple ways. I thought I had squashed it but guess not. You should be able to fix things by just throwing again. Sorry about that

I thought everything about this game was really cool, it has really cool art, the concept is neat and it's challenging, i didn't finish the demo so i'm going to assume this isn't in the game but maybe consider adding projectile enemies to add more of a challenge if you're considering updating this game. so far the best game ive seen in the jam.

I appreciate the kind words! your right, I don't have projectile enemies in the game yet but they would be a good addition.

Thanks! I thought of different tower ideas, but I didn't have the time to come up with levels or enemies that would work with the tower types. Thanks for playing!