Can you survive long enough to win?
Submitted by Xanderwood (@GameDev_Alex) — 11 hours, 29 minutes before the deadline
Add to collection 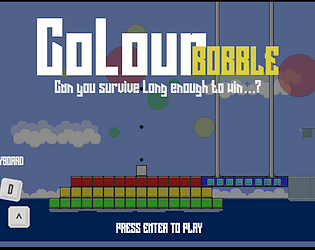 Fantastic game, I found it addicting even though I couldn't beat the level. It was fun enough to make me keep trying which is pretty well done. Good job!

Amazing, thanks. Glad you liked it.

Besides the really slow spawning blue orbs (sorry, I know other comments have already talked about this), the game has a good set of mechanics. I wish the shooting wasn't based off of how fast you can spam the button, but it does lead to the hilariously cheesy tactic of standing under the spawn point and spewing a solid stream of death. With just a few minor qol tweaks like a bit more player agency, this game would be top tier.

thanks for the feedback.  Yep  agreed, all valid points. I'll make the tweaks and add some more levels once the rating period is over. Please drop by and try it out after and let me know what you think.

I found that the superior tactic is to stand in between the two gray cubes and shoot without moving. Getting hit is no big deal because health pour down on you as you destroy balls. also the balls seems to spawn always in front of that opening between this two grey cubes which makes the strategy even more superior.

As other people, it feels like waiting for the blue ball to spawn which is out of the control of the player and not much fun.

This is a fun game! The music with the simple controls really got me engaged. However, I think that the blue balls should spawn more often. Keep it up!

thanks. A few people have said that.  I agree.

I really enjoy this one. Challenging and difficult for me to beat but getting better as I play. It's so addicting!

keep trying you'll beat it. Dont over shoot, pick you shots and use your shield.

Really liked this game, and the art is simple but good for the eyes, and "Oh my hand so many times pressing hahaha

This is such a good concept and a fun game, good job! Like others have said though the tutorial was a little bit overwhelming and I didn't know about the shield for a while. Other than that though great game!

There were a lot of mechanics introduced during the tutorial and was very overwhelming. As a result, I didn't use shield till my second play through (which I did to figure out what shield was). The game wasn't that difficult, as shown by the fact I beat it first try without shield, which I found pretty disappointing. I think the first level could be cheesed by the fact the player can jump onto the grey bricks, though I didn't test it. Overall, it was a great concept and reminded me a lot of games I played as a child on Webkinz.

If you do add more levels, may I recommend introducing mechanics at a slower pace, so that the player can effectively use all of them?

Oh yeah, and I didn't like the fact that some of the collectibles seemed random. It encouraged me just to spam because the heart drop looks to be about equal to the actual color drop, meaning I got a lot more hearts than the current relevant color. It kinda made me immortal

Thanks for the feedback. I will take onboard the comments. Thanks for playing :)

Thanks for the feedback and thanks for playing.

Cool mechanic! The difficulty curve is a little steep though.

I think blue balls could appear more often ;) but more work and it can be a good Pang-like game :)

yep Blue balls spawn every 30 secs. I agree probably be better every 20 sec

Really cool concept, and very well polished! I couldn’t help but feel like the best strategy would be to spam the shots though. Additionally, it was a bit frustrating that the cubes could fall on top of the platforms, making them hard to reach even though they were useful collectibles. Overall, great game though!

there is a trade off in gameplay. Spamming shots means more pick ups but ultimately more balls that can kill you. The way to win is pick your shots and use the shield wisely.

Really challenging gameplay, i enjoyed  it a lot. I really liked the game design elements they force you to make a lot of choices of when to use the shield and which bubbles to shoot, great  job!

thanks glad you enjoyed it.

Very polished and well made game! :)

Very polished and well made game! :)

Basically asteroids with balls, and colours, and a lot of chaos.

Feels very polished in all regards. A fun game!

thanks for the feedback. I was think Super Pang (Snes) when designing it but yeah I get the Asteroids similarity too :)

It's like Pang, but complicated. The idea and concept are well implemented and the game is hard

Thanks, I had Super Pang (Snes) in mind when designing it :) Glad you liked it.

I really like the concept, I think it works really well with the theme!

It's very hectic and chaotic, and surprisingly challenging, which was very welcome. The movement felt fast and smooth. Had a bit of hard luck a few times on the yellow stage where yellow balls wouldn't spawn, but I imagine that was just my hard luck!

Thanks for the feedback, yeah the spawning is completely random, some plays you get all the balls you need and other times it's just a case of waiting for death :)

I love the way the game looks and feels, it's difficult but really fun!

I think that there can be some more tweaks to the UI to make it easier to see. For example when I focus too much on the bubbles, I couldn't see the health bar or the difficulty bar very well, which leads to some embarrassing deaths!

Amazing, thanks for the feedback.