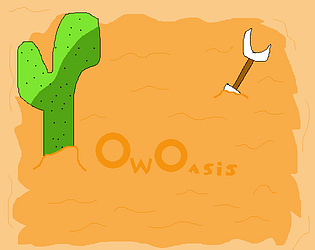 Software used
Constuct 3, and a bit of Microsoft Paint

I love how the motion is shown in the melee attack and throwing animations! The art is very simple and crude but at the same time looks good. Just a couple of minor issues, I think - the sand (background) is too saturated, taking some attention away from the monsters, and the health is white text on a bright-orange heart which is hard to read.

The gameplay is quite fun. As you've mentioned yourself, though, the jumping is useless, and I've noticed that my health doesn't really matter. You could do away with the jumping control and the health (taking damage is still to be avoided because it slows you down) and the gameplay would still be the same. Or, of course, you can add reasons for them to exist, such as more damage being dealt, enemies that attack and shoot, and some things that roll on the floor towards you and force you to jump?

Edit: An idea to make the jump useful - you can make the jump faster than running and make hitting enemies while falling down deal more damage. Unfortunately it's not my idea - it's how it already is in Minecraft - so I don't know if it's okay to implement it.

(also, it's supposed to be a mummy)

I really liked the effects in this one, the MS paint look actually works quite well here! It was satisfying to wack the enemies into oblivion with my giant cactus, and the throw animation is glorious. Nice job!

Man I ended up playing this more than I thought I would, I just really enjoy watching the main character swing his massive cactus. I really like the rearm animation where he uses both hands to get a new weapon. Great work

Argh, I'm playing on a QWERTZ keyboard, so I have to do some finger acrobatics here to switch between jump and attack. ;)

I like the art style and animations, it's kinda cute. And the gameplay is pretty fun, once you figure it out. In the end I seemed to be very overpowered though through all the powerups, the enemies had no chance. :D

Thank you very much :D

sorry about the finger acrobatics, i didn't even knew a QWERTZ keyboard exists. Also, after some waves the enemies should balance their HP with your damage, not sure what happened there

I love it ! And not only cause I also did a cactus hero fighting hordes of enemies X'D Actually the jump it's super usefull to avoid enemies or escape some terrible situations. Also the animations are cool :3 I have a strange issue, I always die with full life and I don't understand why ? Is it a bug or something I don't understand ?

When an enemy reaches the oasis, the game is over too. Maybe that is what you encountered?

Thank you very much :D

and ye, the enemies are probably touching your watah