Earl's hungry, and nothing will satisfy him except his sandwich!
Submitted by Azecy — 3 hours, 11 minutes before the deadline
Add to collection 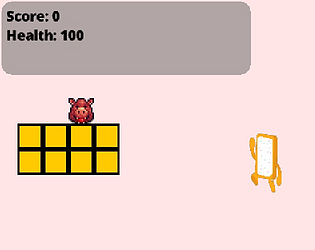 Comments on the jam
Thanks for organizing the jam!

For some reason the game kept crashing for me (as we discussed on Discord) but I was able to get it to work on a different PC.

I really enjoyed playing and winning this game.

Story: well, there's not much story here. I can kinda infer what might be going on, but nothing in-game really had much narrative.

Gameplay: the controls were pretty solid. Jumping felt good. double jump was good. the bombs worked fine. I kinda wished I could have used the joysticks on the controller to move, but DPAD was fine.

The only enemy I noticed were the square fires(?) and I thought it would have been nicer to make that more obvious that it was dangerous. However, I'm assuming that because that was the only enemy that fighting/getting-hurt probably wasn't a priority for the jam.

I liked the level design and how there were multiple flavors/colors. By the end I was getting excited when I saw Purple and heard the purple-room-music.

I really liked how after getting double-jump and leaving that room, you immediately get a payoff to use double-jump in the next room to pick up some Food.

I was kind of hoping that the score would factor into the game more or maybe show a leaderboard or something. Also, when I beat the game I realized that there were other places I could have still gone to pick up more points, so could have been nice to have the option to keep playing to find all the food (or even tell you "you haven't found all the ingredients yet. Do you want to keep playing?"

Graphics:  pretty simple for the level and the bomb and the bombable walls, but the foods were quite detailed. might have been nice to see cracked walls for the bombable ones and maybe having some more exciting explosion gfx/sfx for the bombs going off.  I liked the player graphic.

Audio: I really liked all the music and how each color room had its own. I especially liked the sound of the purple level music since it made me excited to see what I was going to get. sfx were good too.

Enjoyment: although a short experience, it was fun to play through and win, so I did enjoy playing.

Thanks a lot for the feedback! Sorry you had to deal with glitch. Now that I know the cause, it should be fixed for good. The fixed version is ready to get released at the end of the contest & has a couple of other additions too. I'm glad you enjoyed it!

I am definitely going to add the analog stick as an option. It might be pretty easy to implement, so I'm sorry that wasn't ready for the jam version. I'll make it a higher priority next time. I like the player to have options & want to implement customizable controls down the line.

As for the enemies, you guessed it, I prioritized other things first & didn't implement them in time. I thought I'd throw in a few of them despite not finishing them just so people could see that there is potential to have hazards in the game, & your health meter can actually go down. I don't know if anyone killed themselves intentionally, but there's a different end screen for that. Same deal with the other missing features, I will certainly add stuff over time now that there's no deadline. I mainly wanted to have the 2 "metroidvania" abilities implemented before the end & decided to spend the rest of the time working on collectable items since it would be easier to finish.

Thanks again for the input, you mentioned a couple things no one else did so that will be helpful!

I loved it. It was simple and did not look like much from the images, but there was a lot! The music was awesome. The Yellow and Green areas were my favorite tunes. Is Earl a pop tart?

The controls were great. Idk if you meant to add it, but the mini-second of footing when you walk off a ledge that lets you jump is *chefs kiss* beautiful for platformers. The double jump was great! Not too fast of a fall speed, and every jump felt right. Nothing was out of reach or bullshit in terms of platforming.

The art was meh, but who cares? Not a lot of people can make a game in a month, and you made a functioning game with upgrades and music! I'm really glad with this game and the traversial and progression.

Wow, thanks a lot! I would still like to add a lot more to it & make it look a bit more like a full game, but I'm glad to hear it was fun to play. Yes, Earl is a pop tart! The extra time before falling off ledges was absolutely intentional. I learned about that a while ago from tutorials & always throw it in now, since I notice it myself when I play. I'm glad the jump and fall speed felt good. I had an entry in the last MVM & the fall speed was too high. This jump felt "floaty" to me at first because of my previous game, but I like how it ended up too. I'll work on having better art in the future. Thanks again for all the feedback!

Really simple but fun game!
Really loved how the character was "controlled" as the jumps felt snappy, maybe it was just intuitive for me.
The music was absolutely amazing too, really loved how each area had its own track and that the quality of each track was really good.
The art was a bit contradicting as the blocky nature of the blocks would usually hint at some kind of pixel art, which contrasted with how the bread character looked. Love how cute the bread was though!
Overall a really sweet and concise game!

Thank you for the feedback! I got the same comment about the art from just about everyone, so I'll be sure to try to make it better in the future. It's tough when using free assets downloaded from somewhere else, so I'll use art all from the same artist in the future. I'm glad the music turned out well though. It was the same story there, so I'm glad it made it made the game better instead of worse! I'm glad to hear that the platforming felt good for you. Thanks again for the input!

Extremely good music and sound effects. And there's a different song every room!  The art is a bit mixed in terms of details and styles and sometimes I feel like they are fighting each other a little bit.  Gameplay wise, while there's no enemies, it was still quite fun hopping around gathering food items while listening to catchy tunes. Some of the jumps did end up too tough for me to make even after obtaining double jump, and I kind got stranded on the bottom of a level and couldn't get myself out. (But that seriously could just be me and my terrible platforming skill)

Overall I enjoyed the experience!

Thanks for the feedback! I think I made some of the jumps too hard. It's essentially the "beginning" of the game (even though it's short) but you don't really get to practice jumping before the hardest jumps are required. I watched the youtube stream of barrels playing my game and she had the same experience you did. I'm glad you enjoyed the other stuff though! I would like to add enemies and other interesting things, but it's cool that collecting the food was fun. Thanks for the input on the clashing art style too, that's not the first time I've heard that either, so I'd better think about it for next time.

Fun little game. It's funny and quirky and that's what makes it enjoyable. I also really liked the music, it was catchy. Good job!

Submitted
Across the servers (jam version)
LikeReply
AzecyDeveloper1 year ago

Thanks! The music is all CC0 stuff by other people so I can't take credit for that, but I'm glad it added to the game.

This was a fun little game. I liked collecting all of the little food items and walking around as a pop-tart was hilarious. Great job!

Thanks so much! I was disappointed I didn't give it some more play elements like some actual enemies before the deadline, but I'm glad it was enjoyable just getting the collectables.