My Best Friend Has Many Tentacles (VR)View game page

A magical girl must keep her many-tentacled best friend alive in this VR action game
Submitted by andyman404 (@andyman404) — 10 days, 7 hours before the deadline
Add to collection 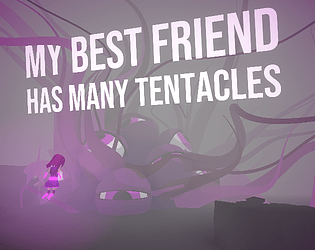 My Best Friend Has Many Tentacles (VR)'s itch.io page

Theme(s)
I understand that most of you probably won't be able to play/rate it because it requires VR. No worries. Here's the full playthrough video:

"My very best friend": Often, magical girls have a cute non-human companion that grants her magical powers. Magical girl Violet's very best friend happens to be a very lovable monster with many tentacles and eyeballs. She's got to keep it alive.

The urban destruction scene is inspired by Puella Magi Madoka Magica's epic battle scene from episode 1 (As If I Met Her in My Dream... Or Something), and the Walpurgisnacht battle scenes. I watched the whole series and the movie while taking breaks from jamming! It was an amazing show.

Feedback
Have a Discord channel for the jammers for more real-time community building.

This came out really well! I love the Macross-esque flying battles. Great music, too!

This looks really good! Unfortunately I don't have my VR setup right now so I can't try this. Is the playthrough video up yet?

Submitted
Shattered - Why Not Me
LikeReply
andyman404Developer1 year ago(+1)

Thanks for the reminder! Here's the full playthrough video I just put up:

Wow, there's a lot more to this than I thought there was! I didn't realize it had stages with specific objectives.

Finally... a more proper submission to this jam... Though unfortunately I do not have VR to test the game -- so I only read the description and wow the concept is so creative. Although I cannot play the game, all I will say is well done :O