A game, where you need to punch mouses to leave the box
Submitted by Andropas — 2 hours, 46 minutes before the deadline
Add to collection 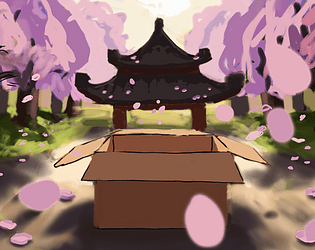 How does your game fit the Magical Girl Genre?
An evil witch bewitched a cat named Kotabi

Which theme(s) do you pick?
Schrödinger's Cat/Superposition

How does your game fit the theme(s)?
There is cat who needs to leave the box

all of them were made during the jam period

a good chunk of them were purchased

Pretty bare bones, You didn't set the stretch mode so the play space was only in the corner of the full screen. The mice all spawned in one corner of the box. Okay art.

I like the painted style of the artwork and the opening theme.  The theme song had this weird beep in it, and the cutscene was a bit long and had no music.  The screen is too small for the window(I'm assuming this because of the grey space on the side). I had fun with the gameplay and maybe with more polish and more levels or mini games, it could be a more realised experience.

There's some really nice stuff in this game, but it's pretty rough at this point.

All the game screens were in one corner of the window, with quite a bit of grey space around them. I figured this way just an issue with resolution scaling but others seem to be having that issue as well.

There's something in the audio, maybe in the music track, that sounds like the seat belt bong on an airplane. It was amusing at first but quickly wore out its welcome.

I'm not really sure what's going on in the cutscene. The art is very nice- it's not a style I see a lot but it works for this game quite well.

The cutscene was way too long for the length of gameplay, but I think this would be less of an issue in the full game.

The core gameplay is actually pretty fun, more than I expected. Unfortunately, I think the spawn logic is glitched. All the mice spawned either very close together in one corner of the box or outside of the apparent playable area entirely.

It's also possible to slap during the cutscene before the game starts.

As a demo it's not bad. There's definitely some work to be done, but I don't think there's anything fundamentally broken- just needs some fixes and some tweaks.

Submitted
A Dream of Valhalla
LikeReply
ShibeyFaceGamesSubmitted1 year ago

Based on what I played, I'm going to treat this one as a demo/prototype.

I liked the artwork! It had a bright, loose style that was charming. I do wish there were subtitles/text to explain what was happening in the story. I actually missed it the first time around, because the text told me to press spacebar. Then I replayed and realized that I had skipped all the story scenes... whoops!

The gameplay itself is a good start.  A sort of whack-mole concept. I played with a mouse, but it would work well on a touch screen! It could use a little more variety, but again, I realize this is a demo not a final project. I did have the weird issue of a large grey area on the screen that seemed outside the playing field, but then a mouse spawned there.

One other stray issue I noticed was that the audio seemed like it was on a mono channel... I only heard it in my left headphone.

This is a good start, and with a little more work and polish, it should all come together. Nice work!

Let's start with the game itself: I like the whack-a-mole concept that's going on here, but there are some issues with gameplay that detract from the experience. For example, the art takes up only part of the screen, with a big empty gray area outside of it. I would assume that would mean the gray area is outside the playing field, but I found mice spawning in the gray area. Speaking of spawning, the mice only seem to spawn in 2 places: the top-left corner and somewhere in the gray void toward the bottom-right. Were it not for that wide gap, this game would be very easy to beat due to the enemies all spawning close together, and some of them don't even move. I do appreciate the attempt to create different enemy types, but there needs to be more to it than just a different color and whether they move or not.

Now for the story: The art attempts to carry the entirety of the story. This is an honorable goal, since if you can tell the story without words, it makes the story more universally accessible without the need of translation or reading ability, but the story isn't presented clearly. Here's what I got: a magical girl or witch is playing with her cat outside one day and presents it with a box filled with mice for the cat to catch. Judging by the summary, that's not exactly what you intended, so you'll need to make the plot clearer in your art in order to convey the story you want to tell, or you need to add text to make what is happening clear. I'm also not sure how the story relates to the theme; Schrodinger's Cat is a concept in which the cat is both alive and dead, but it seems that this is just a cat in a box, and the cat is clearly alive. The witch/magical girl would make more sense too if it was clearer that magic was involved in the cat being trapped in the box; at present it looks like the cat entered the box without any magic happening.

The music was pleasant, but only played through the left speaker. The "punch" sound was a little offputting, especially during the intro cutscene.

This is a fine start to a game since the core gameplay mechanic appears to be present and there is a clear presentation sequence, but I want to see more before I declare it a "good" game. Keep working on your skills and improving, and I'm sure you will succeed.

Sorry for my misstake

Now you can download file in right format (zip)

okay, thanks I just played it, vary challenging indeed, a nice picture book cutscene to give a idea of what is going on, I like what was there, the only complaint I have is maybe you could tack on a extra 5 to 10 seconds, or make a easy mode that does so.

The point-and-click gameplay leaves much to be desired, but with a story the gameplay element doesn't have to be substantial. Unfortunately, it is hard to tell what is going on without subtitles or any particular story in-game. I do like the effort that went in to the cutsceens and the music is very relaxing to listen to. But the description here tells me more about the game than actually playing the game. The magical girl concept here is not very relevant in-game, it's something that is really just mentioned in passing and doesn't seem to be relevant to gameplay. If the player is the cat who is batting all the mice, well, the cat would do that anyway. The random spawning of targets matches the 'superposition' concept, but again that's quite hollow on its own. If the game moved towards being more of a visual novel with subtitles for any story that there is, and while changing up the targets in the future point-and-click levels, it could be improved quite immensely.

Thank you very much for your feedback.

Of course, we wanted to add subtitles, but the last day before  the end of submition we were very busy. My friend was improving cutscenes and I was fixing bugs. We uploaded the current version  in 30 seconds before deadline.

In some time we'll add subtitles, we aslo wanted to add dialogs wich will explain the story. We'll probably add some features wich was refused in this version.

Thanks for playing (and sorry for misstakes in this message). Hope you had fun :D

I am embarassed to say I could not beat the first level. There is not much of a game here, but the cutscene art is gorgeous.