A Shoot'Em'Up for LOWREZJAM 2021
Submitted by tobekko — 3 hours, 39 minutes before the deadline
Add to collection 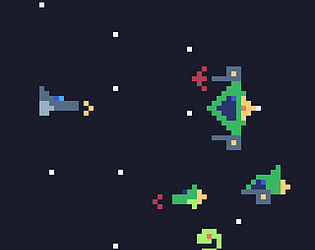 Did you work in a team?
Had a friend work on the music, otherwise it was all solo. It was fun if a bit stressful due to other things going on at the same time but that's not the fault of the jam.

Was the resolution a challenge?
I had to severely limit the original scope of the project which at first involved location based damage for the player and clearly discrete components on the ship but in a 64x64 resolution I could not make that happen.

What did you learn?
This was my first time doing a shoot-em-up so most of these things I did were new to me. Unfortunately I made some pretty ugly code due to time stress, I know I could optimize it but I don't have the time.

Very solid shmup experience! Art and sound are good, with some interesting animations and enemy variety. I also like the fact that the bullet movement has some variation, especially when your health changes. The only criticism I have is that after a while it becomes clear that you can "cheese out" by going up and down and spamming the bigger bullets when your health is low, so maybe it's something to adjust if you're looking to work on the game post-jam. Overall, good entry, well done!

Submitted
Shoot Him Up!
LikeReply
tobekkoDeveloper275 days ago

Thanks for the feedback! Yeah the game is way too easy right now. My thought was that I would balance it around the fact that you will take damage but I didn't manage to get that far so instead the most usual reason for dying is because you get too tired to press the space bar to shoot :D

The level felt really long and seemed to loop so wasn't sure if it was actually going to end but stuck around long enough to see that it did.     The power up seemed completely arbitrary also since it just sort of activates with no indication at low health.

Otherwise though the game ran well and had decent game play not bad at all.

Thanks for the feedback! I'm contemplating making a better/more polished version once I have more time which will address at least some of these issues.