The one-pixel game.
Submitted by zacryol — 15 days, 3 hours before the deadline
Add to collection 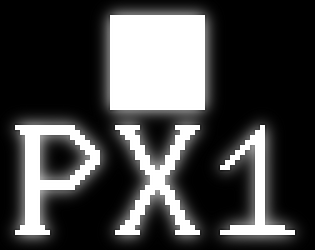 Did you work in a team?
One person. (As many people as there are pixels.)

Was the resolution a challenge?
I deliberately limited myself even further than the base rule, using a resolution of 1 x 1, and seeing what I could do from that. The only real data that could be conveyed was a single color, (unless I used elaborate sounds, which I felt was stepping around the limits a bit,) so I went with a simple reaction-based game. I did also upscale, so the player can actually see it, but the code to draw the pixel specifies a rectangle of size 1, 1.

What did you learn?
This game is kind of a joke, exaggerating the "Low Rez" theme to its logical conclusion, but then I decided to take the opportunity to experiment with Love2D a bit. The hardest part was getting the file to write in the correct place.

This feels like if the people who made that electronic Simon game made a home video version in 1977, haha.

This feels like if the people who made that electronic Simon game made a home video version in 1977, haha.

Just wanted to mention that I agree with Colin and you should try to package your games so people don't have to download something extra. It's a bit of a pain and just makes it less accessible, especially to anyone who doesn't know how to use the command line. I like that you restricted yourself so heavily, it definitely must have been a design challenge! The controls aren't very intuitive though; I like that you matched up the colours on the xbox controller, but although the keyboard uses fairly traditional keys it's kind of difficult to remember which is which for the colours (I'm sure with practice I'd get it lol)

Submitted
Ghost In The Machine
LikeReply
Colin EUMPSubmitted2 years ago

This might be helpful if you continue using that engine.

Also, while ".md" files do open easily enough under windows if pointed at a browser or notepad, I don't think it's a safe assumption that potential players will know that, even if they're participating in a game jam. If you release something for all platforms at once, it's a good idea to make a copy of your readme with the extension changed to ".txt" even if it's not changed at all.

i had the idea of making a one pixel maze game, inspired by the one bit jam hahah