A small adventure game submitted for LOWREZJAM 2019.
Submitted by Pusty — 3 hours, 21 minutes before the deadline
Add to collection 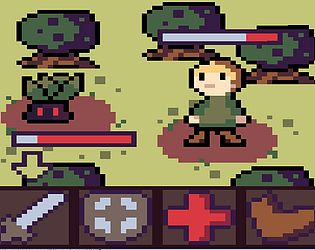 Neat game! I included it in my LOWREZJAM compilation video series, if you’d like to take a look. :)

Cool concept, would love to see it fleshed out with story, pause menu for status/inventory.

Great graphics! I got confused and thought that my health bar was on top of the head of the character... Perhaps enemies are a bit strong?

The graphics was very nice, but I got a bit confused by the gameplay.

Hmm it took me a long time to figure out which HP bar was mine in the battle. I think putting the bars at the same vertical position would eliminate any room for confusion. Otherwise I think there needs to be a bigger time step between the player and enemy attacks so that you can clearly see which hp bar is being affected between each attack effect.

I liked the color palette and graphics, the kraken overworld sprite was especially cute!

I got the axe and bomb but wasn't sure what to do in the sandstorm, I found a lot of blocked or hidden rooms after getting the items but maybe I missed something.. nice work!

My browser keeps scrolling when I hit the space button.
Great job though, having fun playing it.

I really liked the concept and it was fun to play.  Albeit, I was kinda lost on what to do. I killed the octopus but couldn't get past the sandstorm area. The hotbar selection is too fast on button press and some thing in the world that seem intractable wouldn't work for me. Still, what I played was fun and I just love the idea of this huge rpg world in this tiny little window. Great job and thanks for sharing!