Aliens And A GunslingerView game page

A Mad Cowboy VS A Bunch Of Dumb Aliens
Submitted by Regression — 22 hours, 52 minutes before the deadline
Add to collection 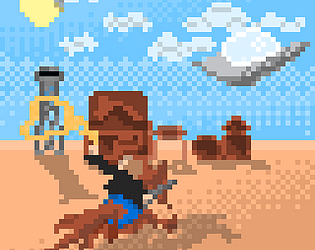 Aliens And A Gunslinger's itch.io page

Really nice alien graphics! I included it in my LOWREZJAM compilation video series, if you’d like to take a look. :)

Cool game ! Just I think the side jump feature is a little bit hard to control. I think the game lack of HUD to display the life points you have or maybe it was intentional. Anyway, it was still nice to play it and good job for proposing it on many platforms !

You forgot the .pck file for the linux build.

So are your game's!

Thanks! Would you mind rating it if you played it? ;)

Unfortunately I can't find out how to open the exe

You mean my game?

Cool idea, and the graphics look good (even if they don't actually line up with the 64x64 grid). Like some have said before it would be nice to be able to see how much health you have. The flashlight effect is also cool. Combat does feel a bit wonky, though and I never really found the computer, the game just ended a few minutes after I found the last keycard.

That last bit was intentional; we were going to make the game a bit like a Wario Land 4 stage where you'd reach the end (the computer in this case) and then go back to the beginning within a time limit, but we didn't have enough time to do that so we made it like it is. Would've added the UI showing the remaining health and keycards too, but same excuse. Might release an updated version with those things.

It's also the first time I've created a combat system of sorts, so there's not much I could do about that :P

This is hard! It has a great aesthetic, nice use of ligthing, etc, and the wall-slide is slick.

I actually wanted to make the visuals look a little more detailed, but I'm glad you liked it!

Nice! a bit too hard for me, I found all 4 keycards but then died to the giant alien.

I liked the platform mechanic and the wall jump.

It was meant to be relatively hard by the way. At least not Ninja Gaiden levels of ball-busting hardness, but you get what I mean

Yeah. The first fast moving aliens looked a bit unfair, but then I realized you can wait them where they change direction, then shoot them with ease.

Cool game! I liked the concept , would've been nice to have some way to know how much health I have

I didn't have time to add the UI, but at least I can warn that you only have three hits