Take it to AndromedaView game page 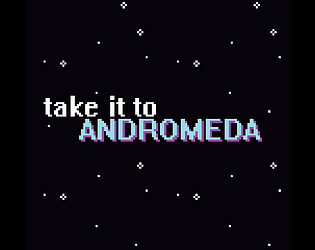 Take it to Andromeda's itch.io page

Nice game. Just wish I knew more about the Gorillaz so I could appreciate it properly.

I really like the graphics. There's a lot of detail and variety in the first level (the second is a bit bland but still looks fine) . The main character looks great and their animations have a lot of personality for the low res style.

I couldn't pinpoint too much obviously wrong with the NES adherence but the game does seem a little colourful. The score counter is blatantly breaking the resolution limitations, as is the death skull thing with the scaling pixel size. The audio seems pretty authentic though.

The gameplay is fairly standard platformer fare but it works well enough. The fact that you have to fight enemies by reflecting their attacks back is kind of interesting I guess. The difficulty is a bit punishing (one hit sends you all the way back to the start of the level) but nothing totally unmanageable. Though I guess punishing difficulty gives you points for authenticity!