Submitted by ludrol — 1 hour, 29 minutes before the deadline
Add to collection 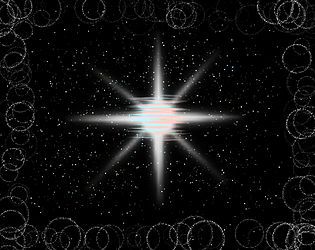 At first I didn't know what I have to do. I've tried to merge some boxes or kick them out of the map. Because you said spamming action in the middle would crash the game (It didn't) so I tried and then I found out that these boxes disappear and make new stars. Maybe add an indicator in the middle, maybe a bigger white point that represents the big bang or something. But it was a really chilly game, I liked it.

A little hint for the boxes. If you change the rigid mode to "Character", you can push them easier because they don't rotate anymore if you try to push them

Very satisfying and chill to play. Moving around picking up boxes and placing them was more fun than I thought it was going to be. After the game ended, I just kept placing boxes because it was just pretty chill.

I would have liked a bit more direction. At first I thought the stars coming from the center were going to hurt me so I didn't want to head towards the center. With how simple the game is, I guess the player will probably just figure it out eventually. The game could also use something of a splash screen or a title in the game. Even if it just appeared at the start and faded out. It doesn't even need to be a menu with a play button.

Laughed the first time I heard the pshew noise. I seriously considered just making vroom noises for my game. Now I'm just sad that I didn't.

The twinkling stars in the distance and having them slowly rotate was nice and subtle. The music really fit the style of the game. Definitely felt like the theme song of vast and empty space.

I might just really like this game because I too made a game a few years ago where no one tells you what to do and you just push boxes around until something happens and it's probably my favourite game I've made.

Hey man! Good job for 12 hours of work and keep attending more jams. It obviously needs a lot of work. I want to give you specific feedback related to audio - when you're recording the 'phewwwww' sound through the microphone use a pop shield or a cloth in front of the mic. It will reduce the plosives in the audio. There are a lot of clicks in the mouth sounds and the music. Hope that helps you in the future! :)

I think it's a good result for the first time. I also needed some help to get what to do.

Good job for 12 hours of work! The game could be more challenging tho

For only 12 hours of work having a functioning game with audio is great! Definitely could use work in giving the game more of a purpose such as having to dodge enemies or having the world change as you move boxes. Also some kind of indicator to show that the boxes need to be put in the center of the screen would be helpful for players to know what they are supposed to do. The audio was really good, though the background sounds seemed to lag a touch. Overall it felt nice to move around and interact even if there wasn't much to do. Thanks for the submission!

Sorry but i have not understand what we need to do. We are able to push box and hang them but not able to combine them. It clearly miss a tutorial or at least an how-to play screen.

Thank you for playing. I was going for very simple exploration of mechanics. I think i gave player too much freedom, too little clues of what to do. Try dropping boxes at the canter of the screen.

that's what i try to do but nothing happen. Maybe not enough boxes.

Hey great game! Art style was pretty nice next time i would reccomend giving the player a proper gameover screen as when you said everything was created boxes contiued to spawn that made me question if the game was over. However overall you did a wonderful job loved the idea and keep making games!