Then There Was The UniverseView game page

Top Down Space Shooter
Submitted by gudamei — 11 hours, 16 minutes before the deadline
Add to collection 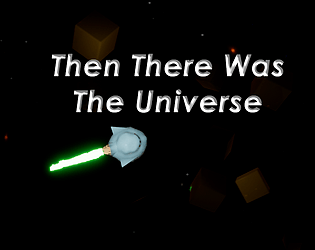 Then There Was The Universe's itch.io page

The scenes are quite cool! I like the music and sound fx! I wish to have easier controls, maybe aiming with the mouse. Also, I don't like that I can't fly when shoot.

Atmosphere was great between the sound design and the lighting. It was fairly easy to tell that the dark, barely-visible cubes were not enemies and the reddish, bright, animated pac-man planets were the enemies. The cutscenes were pretty cool too.

The boost felt great. Flying around the game was fun. The trail changing size gave you a great indicator of how fast you were going. The speeds felt just right. Unboosted, the enemies caught up to you and then boosting got you out of danger quickly. The cooldown was the perfect time; short enough that it was up when you needed it, but not too much so that it was trivial.

More clarity on the white orb thing to transition levels and the boundary of the level would have been nice. Something like a little arrow that floats around your spaceship and points towards the end. It seemed that the second exit spawned where you killed the last enemy which is good, but you might miss it if you killed that enemy off screen. For the border, maybe you could have like an asteroid belt of asteroids very close together.

I was a little confused about the wording when you went through the white portal. It said travel through it to kill the corrupted planets. I thought it meant you were going to have to find another white orb and travel through to kill the planets (like you touch the white orb and it kills everything on screen). It took me a bit to figure out it meant "travel through the portal to go to a location where you can kill the corrupted planets". Honestly, this is such a minor thing and I'm probably the only one who felt this way.

You should probably put the game controls on the game page somewhere.

Good that you have deliver. The ambiance is present too bad that we don't collide with yellow cubes. The clam space shells are so akward (in the good way) it give a style to the game and you do a good job on lights ambiance.

Thank you! Yeah you can actually collide with the yellow cubes but it is kind of rare that they are at the same height as the player so it doesn't happen that often.

Ho i understand
If you got a bit of time i would apreciate to get your feedback on my proposal. : https://itch.io/jam/kindred-community-jam-6/rate/989211

Not sure if it was broken for me or what, but I was unable to figure out how to shoot at all. The audio was clean though and the game otherwise seemed to run just fine! The theme felt kinda forced in the beginning not a real part of the game. Either was cool entry!

You need to press SPACE to shoot.

It's space on the keyboard and square on PS4 controller, but you can use any other supported controller.

The game is kinda made for controller since you need the joystick to aim properly.

Plain, simple and effective! A bit more of a backstory wouldn't be bad. But since this is more of a little prototype, you could build onto that! :)

Hey Great game. Loved the space shooter feel and loved the challenge. Continue making games your good at it!

Submitted
In The Beginning
LikeReply