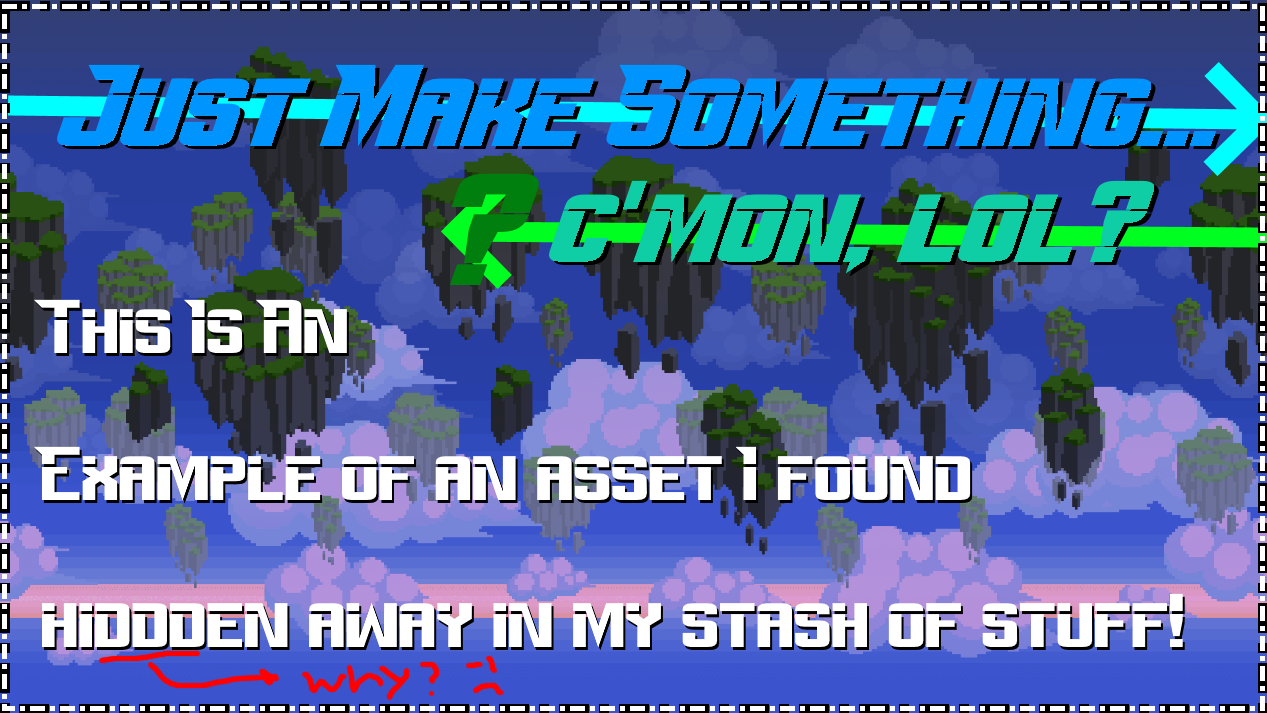 What's This About Anyways?

Alright, here's the deal. You're stuck inside, you've got your weeks/months/whatever stockpile of food all prepared, and your family/friends are taken care of. Employment is up in the air and you've got so much time on your hands you decide to be "productive" but in a way that you enjoy! So instead of playing video games or binge watching Netflix or Crunchyroll, you decided you'd bust out your favorite Game Engine (Unity, of course) to finally start and finish a project, since well - you know - you haven't really done that since life has kept you so busy the past few years, amirite? Yep.

So here's what you'll do: you'll actually carve out some time to "finish something" and feel good about it. Then you'll spam your WebGL build link (because you're going to use Unity and you're going to export your build to WebGL since they make it so easy, you feel?) to all your Discord/Steam/Skype/whatever "online friends" you have and you will reap the dopamine rewards of actually "finishing something". Now because you're a perfectionist and you are going to be embarrassed to send a half-assed pile of garbage to your friends who won't understand how much time was put into your garbage game (one that you can take pride in for having made most/all of the assets thereof, typically), you're going to get ahead of the curve now by doing some homework. You know those cool asset kits or tutorial videos you skip past because you just don't want to invest the time to learn or follow someone else's methodology (you want to "do it all" yourself even if its not as good or takes a lot more time) but this time's different. You're going to have something to show for your work this time that all those low attention-spanned, low abstract-minded/extroverted "friends" of yours with lame-ass cabin fever can enjoy. If even for a second.

Pick a game engine. Find some cheap or free assets (or if you're a hoarder, this is the time for you to finally go through your stash of assets you've hoarded and get acquainted with the best of what you've got). Organize them. Actually pick out some decent sound effects, background tracks/ambience, GUI elements, etc. Get a template "main menu" screen up and running that you can copy/paste and edit later. Then sit down with spiral notebook and plan away. Let the ideas go wild. Then kill it brutally... knowing you'll have to kill %99 of the whacky, too-far-out, over-committed, complicated and so-big-and-cool-it'll-never-get-done sorts of ideas before its too late and you succumb to the disease of never giving it a try in the first place.

Don't let other people hold you back. Let your housemates/family watch their silly anime and redundant/uninspired/dime-a-dozen Netflix shows. You're gonna do something really cool. Hell yeah you are.

Yes, you. The one random person who clicked on this game jam who was probably looking for a low-key little community to "compete" with that wouldn't be so overbearing yet seemed to have a bit of structure and would actually "respond". There is no AFK, anti-social syndrome here baby. 1 man army is here with the energy to get something done.

So basically... The Rules:

[This is written from a 3rd person POV to myself via projecting my situation in a somewhat personified way but feel free to extract what you'd like and do whatever you want. I just want an excuse to have some pressure to "do something". yoloswag420blazeit]

I forgot the login info (failed recovering because I forgot my email info too LMFAO) to my old itch account so I made a new one. It was "mikedabomb". I have 3 amateur projects. Check 'em out if you want.

I've tinkered with game dev off and on the last 2 years. I'd say I'm amateur/intermediate with C#/Unity.

I highly recommend checking out Brackey's channel on Youtube to get started with Unity, if that's what you're into.

Come say hi to the likely only person to be there if you want.

I only speak english just FYI

What will I be doing?

I picked up a humble bundle awhile back with a lot of Synty Studios asset packs for Unity. Mostly had low-poly 3D environments for making maps. I also bought a couple of Hitbear Studio's RPG kits I've been experimenting with. Their documentation and demo projects are high quality and easy to modify. I also picked up a humble bundle that had lots of sound effects and music tracks. I'm going to sort through this stuff and come up with a prototype game and see how it turns out! (Meshtint Studio is another name to check out, they make really cool low-poly character models and sometimes they have good sales too. Although I don't think that's the case right now...)

I will likely upload a video of my progress on a makeshift youtube channel to stay organized and show all one of you guys what I've been up to and I'll post my notes in the comment section for when I decide what it is I'll try to make and show how the end product is likely going to be very different than what I imagined. Then I can look back on this later and see how cool I was doing all this. And show off to 1 random person 20 years from now that would think that's cool that I made something that any 9 year old could've made in about 1 hour with the latest technology and software 2040 has to offer. But nostalgia, right?

I will keep the 30year old boomer spirit alive no matter what! (not even that old btw)

he he ecks dee

try to stop me, I dare you

(P.S. I've never hosted a jam before... but this will be my 4th to ever participate in. No pressure. Just be yourself and do something about it)

-((P.S>.#2 This page's "theme" background and banner are from asset packs I've been sorting through myself, CCO licensed, and minorly edited))-