Defeat a long forgotten enemy, who tries to continue his destructive quest.
Submitted by aeaeae_gaming — 9 minutes, 41 seconds before the deadline
Add to collection 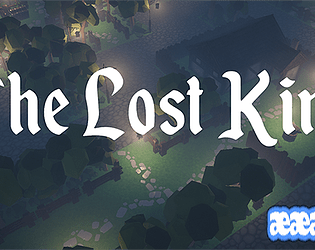 This is great! I was so impressed by it. The art style is unique and looks marvellous, and it explained very well what we need to do and how to play. I love the adaptive music, and sound effects are great.

The story was very cute, although I did miss dialogue as it went away without me. The battle system and movement system is flawless and I LOVE that the battles take place in the area you were stood! The art is really incredible, and I am so digging the style.

There was one area where I was confused, after defeating skeleton 1 at the exit doors, skeleton 2 stood in-between the available squares and I couldn't fight him off to escape, so took the route with the pickaxe. My biggest gripe!! There is no checkpoint or save feature for when you meet your demise 4 squares away from the next level. A little noise or notif for when you run out of turns, and to map 'end turn' to a key (such as e) would be super great too.

Well done, this game is awesome!!

We are delighted that we receive such a great feedback, highlighting the game's positive and negative aspects! We thank you for playing "The Lost King" on your streams! Really enjoyed watching someone play a game that our team created!

We will work in the future to fix the bugs we find and to create more enjoyable experience and again we thank you for taking part in that process!

A fine looking game. The art style certainly grabbed my attention. The mix of 3D and 2D made for a unique experience. The text that keeps the player on track with how to navigate through the different parts of the game were helpful. Good to see that you included audio in your entry too as I know this can be overlooked when creating a game in a given amount of time. I had a good time playing this game. Well done.

Thank you very much for the positive feedback! We totally agree that the audio is great part of the game as it helps the player being introduced to the theme.

Nice one. Keep it up!

Impressive stuff, lots of mechanics going on and a good sized world. I liked the idea of the characters being sprites in a 3D game world but I do feel that there is a bit of a contrast between some of the 3D art, with photorealistic skelletons in a toon style room etc.

The turn based grid movement is cool although I would have liked to have been able to move up to 8 spaces at once instead of having to click 8 times. Also I died to the final boss and It took me back to the start of the game, which was a bit frustrating.

Thank you very much for you feedback, we really appreciate it. Cheers!

Very impressive.  I like games where you have to make decision on how to use your turns due to some limitation and cap. At first I thought it was just a gimmick in this game. But as you explored your rather large world,  I discovered different paths and also side quests, that force you to make meaningful decisions with your turns.

Also found that there was a good level of power creep. but it there was always a challenge in combat especially if you didn't get the first turn.

My critiques are mainly UX, bu I can see why that may have been on the back burner due to the scale of your game world. But having to individual click each cell to move is a bit tedious. If all the cells you could move to was highlighted and their respective action cost displayed would make exploring a  better experience. More user feedback in general would elevate the game in general to make it all pop.

Also had a few Resolution glitches (which was surprising  as my res is 1920x1080)  where not all the text could fit onto the screen at once.

Also there is a lot of text, maybe break it down into smaller chunks. It feels a bit like an infomation dump at times.

But still those are minor, the game feel and world was beautiful, well thought out and interesting.

Thank you very much for you positive feedback, we really appreciate your detailed review and we'll definitely try to avoid this mistakes and do our best to improve our skills  for our next project. Cheers!

Ow my ears!
Aside from the very loud team splash at the start, a very nice little RPG ish thing. Not quite sure what the meaningful choice is between attack 1 and attack 2 in most cases but there's some good tension in making sure you aren't too greedy and can get to the end in time. All presented with some nice pixel art and animation. Good job!

Thank you for your feedback and we're really sorry about your negative experience with the volume of the intro splash, we took a note. The difference between attack 1 and attack 2 is that the first one inflicts the player's damage in triple size while the second one inflicts the damage multiplied by 5. The second one is available on every third attack the player makes.

Ah, so it's just a more powerful attack that has a cool down?

Very uniquely styled turn-based strategy game! We loved the combination between 2D sprites and 3D environments! The gameplay was fun, and the game mechanics are implemented well! The tutorial is in-depth and easy to follow. The text was slightly difficult to read, and the first floor was a little difficult for the introduction to the game. Great job aeaeae!

Thank you for your feedback! Cheers!