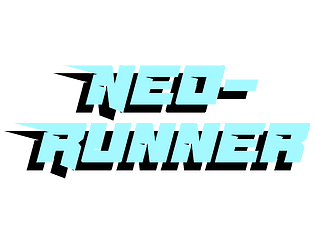 Very well made game that keeps you entertained and striving to get that little bit further each time you fail. Very interesting use of mechanics, I personally love the combination of a wall jumping game with shooting tower defence platforms. Aesthetically, is a very pleasing game with graphics that keep you focused on the level and provide an easy way to see where you need to go next. Overall a greatly put together game with great mechanics, pleasing level design and a superb soundtrack that doesn't distract! Excellent job devs!

Thank you for your kind comments and feedback slogume! We hope you will stick around to play Neo-Runner again in the future!

Neo Runner hosts a great aesthetic and some really fun levels. In the early game there is a bit of a struggle to get used to the unique movement, but once you get that down there are some really inventive levels that make the most of the game's mechanics and provide a thrill. I particularly like the final level of the game -SPOILERS- which surprisingly drops you into a world that feels akin to an early FPS game. -SPOILERS END- This is all tied together by the soundtrack, which is unique and captures the feeling of the game beautifully.

A very interesting game concept, with very solid presentation! The game is interesting, has more than one core mechanics. The gameplay is a bit hard for me, but that could be due to my lack of experience with such games. I like the combination between parkour and shooting. The whole theme is satisfying as it is simple and give room for the players to perform better.

Overall, one of the best additions to the game jam! A very well-designed and polished game! Keep the great work!

Thank you sincerely for your kind comments aeaeae_gaming, we appreciate it! We hope you enjoyed playing Neo-Runner and can't wait for you to try it out again when it has been improved upon!

The presentation for the game was well done. I was pleasantly surprised as I was looking at the credits to begin with when I was starting the game. The background changed colour and then proceeded to do so every so often. A nice touch I felt that ties in with the polish for the game.
The audio, music, sfx were both great to see included in the game and well thought out to in my opinion. The Menu sfx, lovely polish.
As much as I wanted to get through all the levels for the game. I was only able to spare a certain amount of time for my playthrough for this game. Unfortunately could not get that far in the game. I was trying hard but the level would just get the better of me. A challenging game, with some more time I may be able to reach the end of this game build. Nice work CritHit.

Bold visual choice with a solid selection of mechanics but hard as hell!

Oddly, I had a much better time with the later levels as the variety of spaces and mechanics allowed a little more leeway, whereas I struggled to nail the wallrun and precision shooting earlier.

I think the grapple and shooting at the same time has particular potential although probably needs some sort of winch functionality to make it a bit more friendly as I often found myself stuck hanging.

Greetings PlasticFrames! Thanks for playing Neo-Runner and providing us with some feedback! We appreciate your comments and hope you will play again when the game is updated!

While the movement is fluid and fun it does have some minor issues, such as wall runs ending abruptly. The visuals are slick and unique but perhaps toning down the emissive textures a bit would lend well towards making the levels more clear, as having them against a dark background can sometimes make it difficult to see where the object ends. In particular, this is noticeable on the first walls of the tutorial level. As another user commented, the gun projectile seems to function strangely, perhaps due to a particle delay. Overall though it's a cool game, with a fun gameplay loop and well designed levels. Iron out the issues, add more levels and the game could easily see some success as a full release.

Thanks for your feedback tehcmc! We appreciate you for playing Neo-Runner and hope you will play again after we fix the issues you mentioned!

Damn this game is difficult! But SO much fun! Even though I would die countless times, I still felt the urge to continue playing the game. As some others have said, some kind of checkpoint system would be great (but would totally make it easy mode). Having my item stripped away from me over a simple misclick... PAIN!

I love how the soundtrack fits the game so well and doesn't become monotonous! All the colours pop and (most of the time) the path needed to take is usually self explanatory.

I did spend some time trying to mess around and not follow pathways, which led to some interesting results! There are a few buggy little moments (as mentioned by others); I found at some point I was somehow able to make a double jump during a fall, unable to kill some enemies even though I was undoubtedly hitting them and then they would suddenly die as I moved away.  Most of these are probably minor fixes and doesn't really take away from the gameplay or concept of the game.

The humor is enlightening and even though I saw the robots face more than I care to admit, I will most definitely be playing the game repeatedly.

A fantastic effort by what seems to be a fantastic up and coming team and I hope all the best for them!

Thanks for your kind comment Lantoob! Thank you for playing and providing us with some valuable feedback!

Super slick presentation, even has an epilepsy warning like a responsible developer, cool music an menu changing colour with the beat drops...
OH GOD IT'S A FIRST PERSON PLATFORMER
Infamously one of the hardest genres to get right. And... it's functional. The wall riding works but feels quite slippery, the levels are pretty decent. I felt the lack of mouse sensitivity options. The camera goes all shuddery when you move at odd angles which is a bit disorienting. The gunplay is a bit weird, it seems to behave as a hitscan versus the turrets but as a projectile versus the walls? The turrets were a strange choice as you could either try to tactical shooter them around a corner, or snipe them from miles away with the gun's far superior range, which seems at odds with the game's intended gameplay. Perhaps it would be better to not have the gun at all and focus on dodging them instead?
I was going to give up and decide it had stopped being fun, but then, what's this? A grapple gun? It can grapple off all the walls?
And thus I proceeded to ignore all your level design and play Neo-Swinger.
Best sense of accomplishment so far.

The aesthetic was cool, the music popped, loved the voice actor, and think the base game is good.

I do feel the movement lacks a bit of polish though. On the ground it was good but a little light to my taste. But I felt the wall runs in my experience was a bit unintuitive which made the game difficult unfairly.  But that might have been a core design decision.

I also really liked how everything popped to tie into the game's visual theme, in the sense that even your splash screen logo was eye-catching and fit the game, and the audio the title screen text and colour scheme changed at the music drop.

That attention detail and creativity is something i might steal for our next game( if you guys don't mind ;) )

Thanks for your feedback JawByte, we are glad you enjoyed playing Neo-Runner! It's a pleasure that our game provides your team with inspiration for future works!

Loving that game visuals and sounds, mechanically the game is also very great, but - at least for me - IT WAS REAAAAAAAAALLY HARD. Could not get through any level, maybe I would ease out on surviving jumps between wallruns. On the other hand its also good that this game is hard to that there is a feel of achieving something when player is done with level, but hmm maybe would put the tutorial as seperate, very easy format (at least the first part cause we are introduced with different mechanics on different map). After all it is a really great game, one that addicts, tbh, which says for itself. Well done!! :)

This is really awesome, but its also reallly HAAAAAARRRRRDDD!

I love the aesthetic and the player hadndling on the ground, however I feel that the jump could have been a little bit higher and I think that more than 1 health point would be good, or alternatively frequent checkpoints. I was also confused as to how the turrets died as It took a different amount of shots every time to kill them, also the bullets move too slowly for the pace of gameplay that is encouraged.

The AI character is really fun and the comedy is on point, the levels look great, just a few QOL improvements and some polish and it would be amazing. Would 100% buy this if it were a full release, great work.

Thank you so much for your kind comment, Connor! We are really thrilled that you enjoyed the game! Thank you for your suggestions for improvement, they are super helpful and will be considered in future development!

Loved the Retro/Simulation Aesthetic, providing fast paced gameplay for most floors and the implementation of tools/gadgets to keep gameplay engaging, minor bugs present but great job all around.

Thanks for your comment, jaybart123! We hope you enjoyed playing Neo-Runner!