Dark forces are coming to destroy the last orb, you have to protect it by blocking them with walls.
Submitted by dabt0402 — 3 days, 9 hours before the deadline
Add to collection 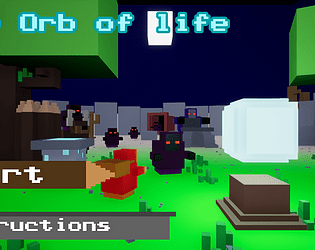 A little tricky to get all your defenses ready, but is doable. I kind of wish the orb had a life bar rather than getting one shot by a speedy enemy.

A good offense is a good defense!

It is a cool concept and it looks amazing, but the mechanics are not so balanced.

A lot of the fun is taken away because you can just mine stones at high speed and spam stonewalls everywhere and that's it.

Also the player movement is hard to control and the timer in the top right corner always shows 1 minute with appropriate seconds.

More enemies per wave, faster enemies and non-spammable resources and the game would be really fun to play.

In the end it's still a great idea and good work, I hope you expand that game ;)

The waves were added last minute, because I didn't have much free time(even though I finished like 3 days before but I had personal stuff to do). About the balancing issues.... It was WAY less balanced when I first finished the wave system, enemies would spawn and it was impossible to get through the 3rd or 4th round, so I decided on a system that spawned a random amount of enemies per wave(increasing the minium and maximum each wave)

I'm probably not going to keep working on this specific game but I'm working right now on a similar game to this one.

Thanks for playing my game and I'll try and fix those issues in later games.

I think this could become a really fun crafting/tower defense game but here's my critique as it is:

- the controls are pretty unwieldy. tying player rotation to camera rotation would help a lot.
- once you figure out to block the tubes the game is pretty much over. didn't see an enemy after the 5th wave or so. more enemies or faster waves would help.
- I'd love to see what wave I'm on (am i missing that?)
- not sure what the timer(?) in the upper right is for

Honestly though if the above changes were made I would definitely find this game super addicting and fun. Cool concept!

I agree that player movement is unwieldy,I probably spent 10x more time on the wall placing system(and scraping ideas, I have about 5 enemies that never were implemented and atleast 2 types of walls)

The blocking of the tubes was a remnant of the unbalanced wave system at the start, I tried balancing it by making it "expensive" but that didn't fix it, also I was going to remove it but completely forgot it. And the wave number is completely on my dumb brain for forgetting that,there is a variable called wave number that is only used on the spawners)

And the timer on the right was to help me(mostly) setup the time between waves but mid development I decided to let it be the timer of the game to see how long you could survive) and also(a scrapped idea) was for every 3 minutes a boss monster to spawn.

I'm probably not going to work on the game(for now at leastbut maybe one day I'll come back to it) because I'm working on a similar game.

Thanks for playing and I'll keep you critiques in mind next time, and maybe make a better game.