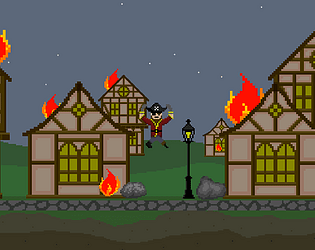 Random Game Idea
A game where you massacre surprised pirates near an immaculate battlefield, but everything is on fire.

How to Play
Controls are listed on the itch.io page and in a .txt file available in the download.

Additional Info
A basic fighter game made with Unity 2D. Run around and kill enough pirates to beat the level!

Very cool graphics! I included it in my Insanity Jam 4 compilation video, if you would like to have a look :) https://youtu.be/6fdBM8oj9vc

Cool music and animations :] I liked the main character design.