A casual platformer about delivering stuff for people.
Submitted by Colin EUMP — 2 hours, 35 minutes before the deadline
Add to collection 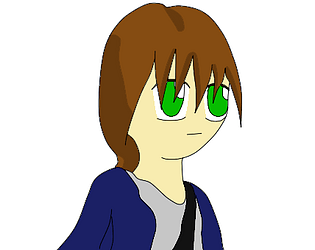 The character is fun and easy to control. The parkour mechanics were easy to understand at a glance and very original. I would have liked the fall damage to not be this punishing however. I can barely fall a height slightly higher than my jump without taking damage, and that quickly became frustrating, to the point where I had to call it quits after too many deaths. Also, there was an inconsistency to how ledges that you can stand on looked like that made things more confusing than it needed to be

There is a lack of sound feedback on the main character that also affects the experience quite a bit.

There was plenty to do in this game just on the two first towns, and I liked the characters in general

While I think it looks cute, I feel it needs a lot more polish in the visual side. Particularly on character portraits. I also found that the text in conversations can be partially obscured by the portraits.

I was confused as to how to exit the initial house at first since there was no explanation on using the up arrow and the door shape kinda blended into the environment. This adds to the point I said before about the art inconsistency in defining what is foreground, background and interactable

Music was nice and relaxing. The dialogues were funny and charming. The lack of sound effects is very noticeable however

There is lots to do but I feel players can get frustrated fast by the gameplay issues, even if checkpoints are readily available

The idea is really original. With plenty of polish and more variety in the parkour mechanics, this could really stand out

I was having fun with this! But then while I was on my way to Rotin (aka third town), I opened up my inventory (which btw, took me awhile to figure out is Enter, I did not see it listed in the controls), went to eat a ration, and the game crashed :(
Good stuff though, I like the difficulty and the need to take measure of where you are and where you want to go (dat fall damage!), it adds a layer of thought and complexity as you can't just blindly power through. I like the graphics as well, and it plays very smoothly. I did notice a few text glitches, but nothing big. Overall: good job, I'd like to play more of this!

Thanks for playing.  Judging from what other errors have been reported, the crash was probably due to the specific description it was trying to load. Do you remember which packages you had?

I think I really only had packages that were from Mahara and meant to be delivered to Rotin, so it was probably one of those.

I like the idea overall, 2D platformer about running errands and delivering things, with the possibility of exploring. I also think that this can be developed into a nice full game. Some issues I would like to point out:

Things that in my opinion cold be improved

In a nutshell, it is a lot of work for only one developer and it is a funny entry, so good job! The game has potential. Keep up with the good work!

Thanks for playing and for the detailed feedback.  The reason I didn't use "z" for interacting with people is because I don't like giving buttons potentially interfering functions. In this case, the player might want to jump while in range of an NPC, which could get annoying. The falling damage has been mentioned by several commenters. Would it help if I set it up so jumping sideways doesn't contribute to the falling damage at all? I could do that by having it be based only on difference between starting ground and ending ground.

I think that yes, that could help to balance the fall damage. It is hard to know until you try, but it is a nice idea

A simple platformer with custom art. This feels like a good start for a game that can be expanded upon. The falling damage got me every time.

I like the direction this is headed. It took me a second to figure out that z and x were for crouch and roll. I had to basically go through and push all the buttons on my keyboard till I found it. Easily solved by putting it on one of the first signs you come across or once this has some sort of start screen. I like the game play. Controls are nice and tight. A little feedback as to when you have fallen or jumped to far would be nice. It took me a bit to figure out why I was dying, till I looked up at the hearts as I fell. I'll definitely be playing thru more of this one

Thanks for playing. If you don't mind my asking, how fast is your computer?  The game was developed and tested mainly on a low-end laptop, and the crashes appear to happen more often if the code finishes faster, but the build that was uploaded didn't crash on either of the testers' computers, so I'm wondering if it's because no one who played that build has a fast enough computer to trigger the bug.

Also, regarding the things to hang on to, did you have that problem only in towns or also in the forest?

That was an impressive amount of custom art, and the platforming mechanics work well. One problem I bumped into was the last line of text in some of the longer dialog boxes is doing some weird thing where it stretches past the character's heads, like this: https://imgur.com/a/kiKIUfl

Submitted
The Butler Did It!
LikeReply
Colin EUMPDeveloper2 years ago

Thanks for playing. Yes, I noticed that, but I didn't want to risk trying to fix it during the month allotted. The "engine" in this case is modular code I built on top of another library (and got permission beforehand to use for the contest), but it's woefully incomplete, especially the text rendering system.

Congrats on the sheer level of custom art in this game. The animations for the MC were nice and fluid as well! It was fun to jump around, although I found the damage to be a little unforgiving at times. (sometimes merely clearing jumps between tree branches resulted in damage) The game might also benefit from better telegraphing to the player they got hurt through some sort of sound effect, I didn't notice until I was almost dead haha

I am uh... not very good at platformers, and died every time I tried to get down the cliff-side on the other side of the cave in haha So I wasn't able to do much delivering. Still, I appreciate the effort that went into the custom graphics a lot~

Good job on finishing and submitting your demo!

Thanks for playing. One of the testers mentioned lack of visual feedback as well, but I was busy getting the more serious issues out of the way. I usually like to make characters turn red for a moment on damage. Part of the point of the platforming is supposed to be figuring out the paths that result in the least damage, but I'm not sure I made that clear enough. Were you able to figure out how to roll on landing and how to use items?

Ah, I did wonder if you could do a roll landing to avoid taking damage. I tried a few times, but was never successful, so thought I was wrong! With that in mind, I might give this another go. I wanted to at least complete the first delivery!

I did see how to use items :> Though the rice ball didn't heal me as much as I needed heh Never got money to buy anything better. (or a second one) I had more trouble figuring out that 'up' was how I used doors. (I spent a while screaming "How do I get out of my house!!")

I suppose I should ask, as this may have been another oversight of mine, is there a way to drop off the edge of cliffs into the hanging pose? I was doing it by dropping right off and moving towards the edge quickly, praying the MC would catch it.

I think the problem with finding the safest path (at least for me anyway) was that it wasn't always clear what sort of distances would hurt. Especially when making horizontal jumps. The distance for fall damage was easy to catch onto, but when clearing mostly horizontal jumps in the branches, it felt like I was being punished for clearing a long distance simply from the height of my jump alone. I struggled with that.

The damage is based on vertical speed, which I'll admit isn't the best way to handle it. It didn't occur to me until it was too late, I should've put an indication to test the horizontal jumps on the slope outside the home. On a light jump she can fall 2 tiles worth further than she started before needing to roll. On a full jump she can only fall 1 tile beyond where she started.  The window for rolling is 1/3 of a second before you hit the ground. That was good enough for me to do it consistently, but I didn't get a chance to ask the two testers whether they could too. Do you think it needs a bigger window?

For grabbing the edge you're standing on, I think it works better to tap jump so you have more time to turn around. The ability to climb into that position is one of the things that got cut due to time, mainly cause I'm not actually very fast at making animations. That said, I thought I'd set up all the actual cliffs (as opposed to branches) with a lower ledge to grab, specifically because of how awkward it'd be otherwise. If you're having trouble finding it, try using "s" to look down. I didn't realize the game page's description wouldn't be on this page so I didn't mention in-game that wasd controls the camera.

Regarding the rice balls, you should be able to buy 2 more immediately, as long as you don't fill the bag with packages to deliver.

Nice 2D platformer, solid control, good Parkour feel and damage system. Did you draw all of your assets on your own?

Thank you for playing.  I drew all the visuals that aren't text, yes. The font is royalty-free.