Join the heroes of the Valcarta as they race through a dungeon filled with obstacles in order to save their world!
Submitted by BlackswordGames — 6 days, 5 hours before the deadline
Add to collection 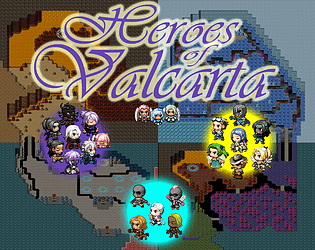 I've provided a dropbox link for those interested in playing a fixed version in the game description above!

I like to keep reviews short and sweet! So I'll do a pros and cons!

All in all, I think with some time, and effort, you have the skills to build a very competent larger game. But some skill sharpening is definitely needed. A lot more world building should be exercised, and the use of a more readable font would do wonders!

First of all, I can see why you issued that warning about the opening cutscene (though a quick explanation for it BEFORE I suffered THIS... EVERY. FIVE. GODDAMN. SECONDS... literally: 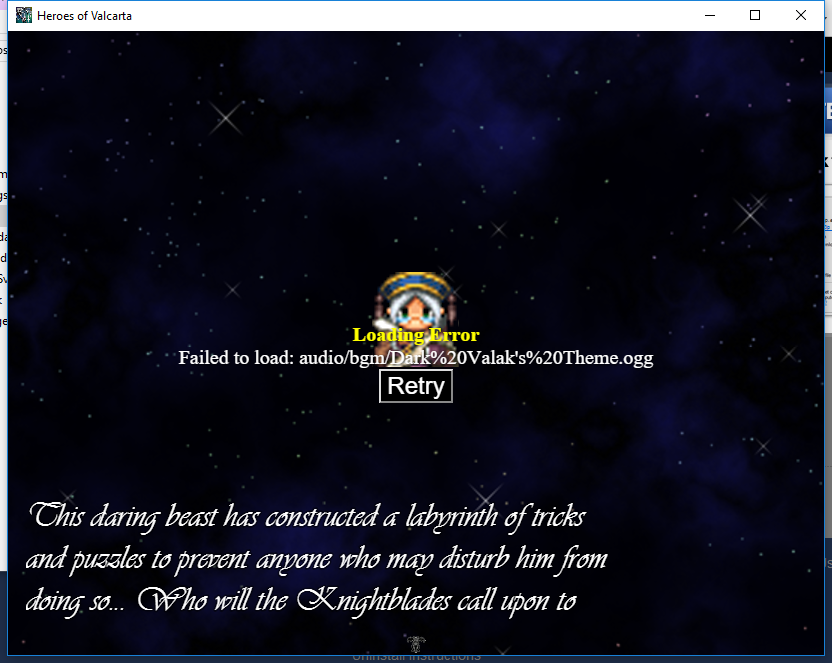 ... would not have gone amiss. Now? Too late!). Experiencing this already generated ill will toward this game on my part which I really tried to overcome in order to review this objectively.

With that out of the way, I appreciate trying an unusual font, but in certain contexts it was just overpowering and illegible. This feeds into the notion that at best, this whole game was style over substance, and at worst, an ill-conceived unenjoyable mish-mash of gaming elements done, done, and done again (except for that random fire field, which I believe has not been often done before for a very good reason).

There seemed to be some added intentional mechanics in the battling that I did not understand, nor did I need to, other than to satisfy my most pressing question "Why isn't he dead, yet?" during the first boss; I was looking at the wrong meter. And the other meter is there because...? Also, what incentive have we to hold back on our strongest attacks, without need to conserve any points for anything? Where is the utility for the weaker attacks? For the "escape" function (where we fight nothing but boss after boss)? The Guardian Force skills (or something like that. You know, with the Deconstruct, Nurture, and Serenity options?) on the other hand got loads of utility for their value in expediting the battles (or for being the only means of keeping health up to max). At the end, I got a 416/10000 and an F ranking for some reason. Why? How should I know? Try again? I will live, but thank you anyway. I am not motivated to spend another hour on that. How would one be expected to improve it, anyway? Through a different character selection, where we have to read through so many stats of an overwhelming selection in that scarcely legible font?

It looks like a lot of effort went into it, though.

Which characters did you select for your team?
Yes, there is an issue with the intro scene which was why skipping has been stressed. Hopefully you restarted the game after experience that issue noted in the screenshot provided.

Hopefully these points will clear up the things you had so many questions about:

- The Fire Field is far from random and there are designated safe spots in the form of lightly coloured tiles on the map for the player to use. The idea is to simple run between safe spot to safe spot and make it to the switch.
- The bosses health is displayed when damage is taken, above his head. The other meter you mention will trigger a dangerous attack when it gets filled.
- There is no reason to ever use any attack but your strongest. The game is meant to be done quickly. Adding strategy layers to combat would, in nature detract from the speed-running nature of the game. "Pick a team of heroes and bash through the scenario" was the basic concept.
- Your biggest qualm was the score and being unable to discern how to make it better.  Your score is based on the time it takes you to complete the scenario as well as a base number in which your deductions (Knightblade Skills) come off of. The Knightblade skills themselves do state that every use of them reduces your score in their help text. So, if you are using them consistently... by design, you should receive a much lower score than using the character skills.

I played with the dryad, the wandering priest, the centaur, and the seraphim, the last of which would have definitely been the weakest link if not for her ability to spam Deconstruct.

Indeed I reset the game and skipped the cutscene, which is how I figured out the problem.

OK, I must admit it was not entirely true when I said I did not understand the scoring. I did, at least mechanically, but my problem with it was that it was not a motivating factor me. Sorry if I misspoke (and I know I misspoke, so there).

Somehow I never did make the connection between the bottom meter and the attack it supposedly telegraphed.

Indeed it would be tedious to incorporate layers of strategy given the basic concept.

Maybe this is a masterpiece for speedrunners in the making, but it must be said that I am definitely not representative of that market.

Upon opening the game, you will be prompted with an Intro Scene. Please skip this by pressing 'x' (as per the in-game command).

This is my playthrough of Heroes of Valcarta