Throw that screenshot up on the wall and see if it sticks!

I uploaded DyNo yesterday (a simple Visual Novel engine) and this Jam is a great opportunity to improve it.
Here's a picture of the Example story I made with the Prototype (engine+story&assets take around 600 KB): 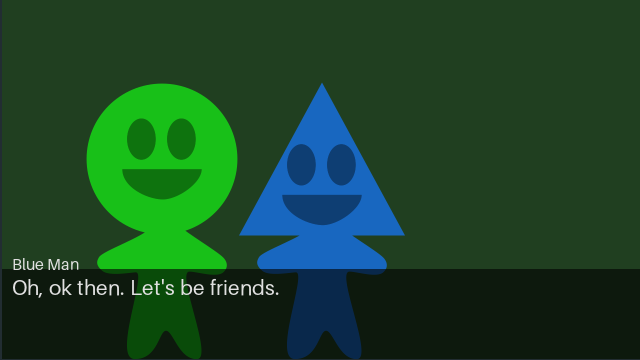 Let's see what I cook up during the Jam.
Note: I'm only going to re-use some code and the font.

I can't wait to see what you do with this!  So cool!

I am excited to see what you can do with a visual novel under 2MB. That's so cool!

Here is a glimpse of my entry.

Wow. So textures, models, sounds and everything are together < 2MB?

What are your format standards for something like that?

My source model is in DAE format, it is almost 6 MB but if you save the scene as binary AND break inheritance all the information is saved inside the scenet, then you can delete your source models, of course if something changes you need to do all the process again or the animations can be saved individually as binary files (anim) and only reimport what is changed.

Set out to make a little "open-world "game. Spent about 20 kb making this abomination:

Basically, instead of using a heightmap like any reasonable person, every terrain feature is a height function, and the terrain chunks combine all the height functions for every point. Rather than moving around the terrain, the terrain updates with an offset so it appears it moves around you. Currently I don't have any movement restrictions or physics - it's just panning the world around.

Problem is, calculating all of the heights and normals gets sort of slow. I tried splitting it into chunks instead, which helped a little, but the seams are pretty obvious since I fudged the edges so I wouldn't have to calculate heights outside of the chunk. Probably would've been more reasonable to just calculate the extra rows - I'll have to try that later.

I'll have to see if I can multithread any of this, too. Any suggestions for performance improvements would be great - right now, it's able to run at a decent frame rate, but more terrain features are going to increase the overhead. It exits most of the calculations for points out of range of terrain features, but I'll probably have to find a way to stop those from being loaded in the first place.

Definitely going to change the material so it actually looks like terrain.

Edsger W. Dijkstra is surely going to hate this one ...

Reply
Cutre StudioSubmitted1 year ago(+2)
A small glimpse of my entry.
Reply
Deleted post1 year ago
Deleted 1 year ago
Reply
justadude11 year ago(+4)

um, you need to use godot engine,not unity

Maybe he likes to prototype his Godot projects in Unity?   ;-)

Here's a W.I.P screen shot of what I've been working on: 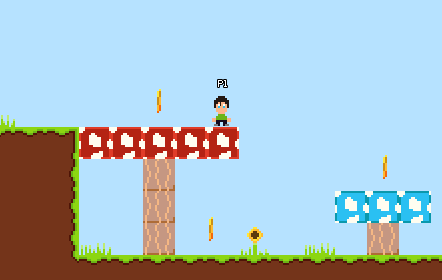 (Those lines are coins spinning, I just caught the worse frame by accident!)

I'm working on a low-res platformer, but with local co-op (not online), simple AI, and the ability to choose from multiple characters because I like a challenge 😜

Thanks for making this jam xudz! It's been a lot of fun working under a limitation like this.