control a robot for destruction.
Submitted by MFauzan (@MFauzan80) — 3 days, 13 hours before the deadline
Add to collection 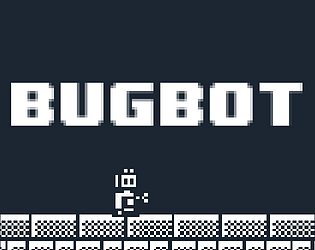 Totally loved the art. I found the game a little bit slow and all of the challenging moments of it felt a little fabricated by the camera movement mechanic. Though I find it interesting. Solid submission overall!

Original and interesting concept to have the camera be dissociated from the robot. Good take on the jam’s theme!

I would have loved to have some complex level where I would have to control the robot while shooting enemies away. Also maybe when you start damaging a machine it would spawn flying enemies to shoot while waiting.

I died on the second mission thinking some bricks in the background were a platform to jump on.

Oh and at first in-game I was reading the Z as a 2 because of the font for the shooting hotkey. So I was quite confused since 2 was already assigned to left… I went back to the gamepage and got it.

Grats for the game!

Love the art :) Everything seems so well put together. Very cool game

Interesting  gameplay, though I think it could stand to be a bit faster (in particular tearing down the machines), I would often kill all enemies in the level while destroying the first and/or second machine. I was also really hoping for a short cut-scene of some kind after completing both missions. The difficulty curve was the same for both red and blue, which meant that if you completed one, completing the other is mostly more of the same. It would probably help to either stylize the gameplay more, e.g. one has more combat, other more platforming (or to make 6 levels of increasing difficulty, and switch them out, as baked orange suggested).

Interesting concept, I liked moving the camera separate from the robot. The controls were also clunky enough that it was a game mechanic, that I had to remember and prepare "okay, 3 and then 4 immediately so I go to the right and jump".

I also really love the art, and the 1 bit design of the levels and Professor Electron.

The game is really slow. The destroying machines is really slow, and I have nothing to do while waiting for the robot to finish, except the few times enemies are coming towards me. Often, the enemies took so long to get to me that I only had to kill one, and then the machine was down and I beat the level.

I like the choosing which team first, but I think it would have been better to either make 6 levels that increase in difficulty linearly, and then just color the enemies red or blue depending on what I picked first, or design different kind of challenges to overcome in each world. Starting over on the easy levels when picking the other team added to the slowness.

Excellent art and UI design. Everything was displayed very clearly.

My only suggestion for improvement would be to increase the speed of gameplay.

I liked the concept of controlling a robot while having to also control the camera. It was unique. The map to choose locations was cool. As well as the art style. Having an animated face be talking to you was cool.

The game did feel a bit slow as the robot did not move too fast. Especially when it was destroying machines.

I like the graphics and specially the smooth movement. Controls are original but not hard to learn and tutorial is very well done.

The only 'problem' i can see (not really a problem) is that you are forced to use the mouse on the level selection screens, which feels strange as you are playing the whole game with keyboard.

Submitted
The siege of Qwasd castle
LikeReply
NeotoonDevYTSubmitted196 days ago(+2)

The art is really nice, and when you get used the controls its smooth sailing.

Was a bit confused on the beginning of the game, didn't read the description for the controls I thought it was on the game so that was on my part.  and maybe a little more player feedback on the attacking of machines.

Congratulations on your submission, Cheers!!!

I had a bit of trouble with destroying the machines at the end of the first level. Other than that, the art is solid and the sounds are fine, though there're random noises I don't know where they're coming from (an action I'm making or other stuff around). I liked the concept

By the way, may I know what your problem was when destroying the machine?

I kept shooting at it and it didn't do anything. The green bar (I suppose its health) didn't go down or anything

place the robot into the machine area then use the damage command to destroy the machine, not shoot it

Solid entry! The game was a bit slow to my taste, in particular when I die, I have to restart the whole game. However the art is on point.

Submitted
You are the coward!
LikeReply
MFauzanDeveloper197 days ago

By the way, if you die it will only restart the level not the whole game, except the tutorial level.

Cute visuals! The game is really slow and I wasn't sure what to do about enemies. Not really understanding what the damage command does. I feel like the core mechanic could be pushed a little further. As another commenter said, queuing up commands and then running them could be a neat little gameplay loop. Right now it feels more like a platformer that I'm only technically controlling indirectly. Still, there's a lot of effort and charming visuals here. Overall good job!

You can kill the enemy by shooting it (press Z).

Nice idea and great aesthetic but the game feels slow

Submitted
RAIFSITTIA: Royal Army invaded my forest so I turn them into animals
LikeReply
CarrasSubmitted197 days ago(+1)

Not quite sure how to shoot, the tutorial says aim and press 2, but that causes the robot to go left. i played 2 level just by jumping over the mob

you have to press Z to shoot.

Congrats on the entry, well done! ^_^

The style remind me of those old-school game, and the art fit well with the sound and gameplay.

As other said, it’s simple and you can easily tank the ennemies that come your way. I also didn’t see much difference in the layout of the red/blu base.

Good idea, perhaps it would’ve made sense to program the robot, i.e. queue commands to complete a level? Just an idea.

I love the aesthetics of the game. Great job there. Not too sure about the controls though. I think using wasd+mouse for aiming would have worked better. We're gonna need the mouse anyways for clicking ui elements.

If it were little bit faster could work better, specially because if you fail you have to start the level from the beginning.

I didn't know how to avoid being swarmed by the robots in level 3, so I ended there. I'll try later. :D

the enemy will stop spawning if the robot comes out of the machine area.

Oh, nevermind, I just discovered that I could shot the enemies, now I was able to finish all the levels. :D

That's pretty fun! I really like the graphics, especially the screen layout. It really feels like a 'clunky' old piece of technology being used to remote-control a robot, like you would see in old 80s scifi type stuff. The control idea was pretty cool though, and having to move the camera separately really sells the difficulty of it being remote-controlled. Aside from the nice aesthetics, I did find it a little slow, and I think it could benefit a lot from some music or extra challenges that require the player to make use of their remote-controlled robot. Overall a good submission! :D