Search for hidden treasures.
Submitted by Stephann (@stephann_v) — 1 day, 18 hours before the deadline
Add to collection 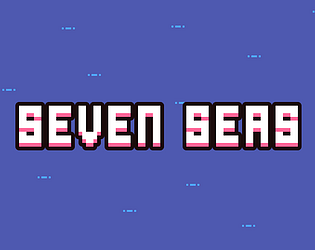 Game Description
You have 7 minutes to search for 7 hidden undersea treasures across 7 seas.

Very nice game :) The radar acted a bit funky, or I fully dont understand how it works :D
Great graphics!

Cool! Sailing around was hard. But the radar detector didn't work as well as I would have liked, and it wasn't clear enough that I even had a radar. I think the issue is that the sounds are spaced apart so far it's hard to tell when I'm getting closer. Sounds closer together would have helped. I liked how you got upgrades when you found treasure.

The art is adorable! Sailing around was a LOT of fun! I feel like this could totally be an integral part of some cool adventure rpg-type game!

Nice concept, enjoyed the art and navigating. Would have been nice to walk on land too.

The radar could use some work, felt kinda wonky.

The graphics and sound design are great. However, I didn't enjoy looking for treasures at all. My main issue is that the radar does not tell you when you're close enough to a treasure to get it.

Thanks for the sincere review, Hedi.

This is a very nice, chill game!

I love the art style. It’s fun, colorful, and simple… just enough to be brought into the game, without going over the top!

The mechanics are pretty simple, in a good way, for the most part. That said, the red square in the bottom right of the screen confused me. For a while, I thought it was a direction indicator. I think it had to be directly pointed out to me that it pings faster the closer I get. Once I learned this, it made more sense, but, since the indicator doesn’t ping very fast at the start, it’s not very obvious.

The other issue I had… which, I’m not totally sure if it’s an ‘issue’ or a ‘preference’ sort of thing… was that once I started a sonar search, I couldn’t break out of it. There were a few times I either hit the sonar control by accident or I start it and moments later decide “that’s not where I want to search”, but in both cases, I’m locked in… eating time. Again, I can’t really call that an issue, because I can see that as being part of the challenge too… I don’t know. Lol… take that little ramble for what it’s worth.

Over all, I really enjoy this game. Challenging without being overly complex. Beautiful graphics and nice sound. Excellently done!

Thanks @ObsidianBlk. It was awesome watching you playing my game, spite of the game flaws that affected your experience. Thank you very much.

good graphics , but i couldn't find any treasures

=(. Thanks for playing Seven Seas.
If you want try again. Some insights:

Simple idea executed well. Only remark from me is that the radar is a bit too bad initially. Having to spend a lot of time 'triangulating' the treasure or even trying multiple times across the fast beeping area feels pretty bad.

Hi Stephann, I liked this concept. The art was cute, the searching sound was catchy and mediated the searching time well. I liked the upgrades along the way. I wish there was a cancel search button. I wanted to explore the islands too, I wondered what could be on them. This is a great concept, with a lot of expandability. Excellent stuff.

I love the art, it's really confy, I couldn't manage to find all the treassures but i had a lot of fun trying, great submission, congrats!!

Nice little game!
I liked the music and sounds of this game alot. When the radar pings and search music aligned once it sounded pretty cool.
The art is also very cute :)

Also the idea that you searching for treasures get easier with the upgrades is nice but I have to agree with the others that finding your first one is kinda painful.

The art was cute and charming , i really like the red indicator that come up when your near and the music was also good

Had a great time playing this one - I love the art style, the music and the idea. Great job!

Thanks @CroSnake. We used the same theme haha. Nice.

I loved the simple pixel art. Really cute.  It was a bit frustrating to find a treasure (low radius, long time to do sonar, also maybe the visual indication is too vague?).

Thanks @SnoozeTime. The idea behind the weak ship on start was to give more relevance to upgrades found on treasures, but according to comments, the ship is too weak haha.

Very cool game. It has a lot of polish. A little to hard to find the treasures in time, you could consider adding more than seven treasures but player is required to find only seven. Really great experience.

Submitted
They are lost, You must help them.
LikeReply
StephannDeveloper1 year ago

Thanks @ludrol. Really it's hard to find treasure. I tried to make treasures and search area bigger to solve this problem, but didn't make it much easier.

I loved the art, and it has nice relaxing background music. The treasures were a bit hard to find, not sure what the best strategy would be.

Thanks @Nisovin. Yeah, the treasure is hard on first gameplay, but when you try again you can find all 7 treasures on time.

Great effort here! I love your art style a  lot and I think you had a really great idea for a game. Two pieces of feedback for you:

1. It was a little difficult to find the treasures as the radar ping wasn't quite sensitive enough.

Overall though: fantastic effort on your first game, you should be super proud of the work you put in! I hope you found the experience really fun and you learn a lot for the next one :D

Thanks for the gently words, @RomeRomey.  Yeah, the idea behind search too long was the treasure upgrade that make it faster.