The story of a boxer, who's a little heart, sick of being the underdog. A Godot Wild Jam 30 submission.
Submitted by MunroMunro, Sylphidiuz, Grimmzane, Kiskadee
Add to collection 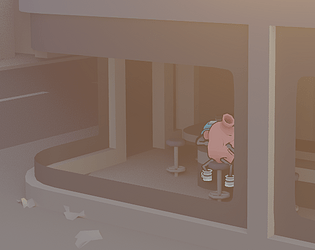 Absolutely love this concept. The visuals and audio were also on point. With the dialogue, you managed to keep it simple while still conveying the struggle, and inner turmoil of the little boxing heart along with a bubbling of hope underneath. Well done! The different coloured text depicting the conversation was clever and added a simplicity that works so well with this game.  I also thought combining story, character progression with the rhythm mini games was very original and enjoyable.

I'm not sure if this is because I am terrible at rhythm games (I am) but I felt that the controls weren't responsive sometimes? Again, that may just be me.
One note - I'm on a Linux machine, but managed to get the game to run with Wine.

Submitted
Till Death Do Us Heart
LikeReply
SylphidiuzDeveloper325 days ago

Hey ! Glad you liked the game.

I messed up the rythm aquisition with high bpms. But once the evaluation period is over, I'll make sure to fix my mistake.

LOVED the game. Will check it out again after the update.

A very cool little game, a bit rough around the edges but the idea is really fun ! :)

The art of the character is super well done !

Cheers and congrats on the game, hope you will get a chance to release a final version <3

Hey, thank for you playing, hope you enjoyed it.
We had a lot more to add, but couldn't due to the rush to meet the deadline.
We'll be updating the game once the jam-review period is over, so stay posted for the updated version.

The game transcribes well the slow grind of training every day. It also actually trains the player before fights. I think it would be better to display when fights happen on the calendar and make them more frequent. Maybe once or even twice a week. The mini-games of running upstairs/eating/… are pretty funny.

I liked the dialogues but the text appears a bit too slowly. I was intrigued to discover the rest of the story but unfortunately I got rekt at the first real fight and the “next” button was not doing anything :/

I think the “on beat” detection could be tweaked as well to make it more forgiving. I think I’m not that bad at keeping tempo :D

Hey VikfFro, good to see you here and thanks for playing/reviewing.
I'm glad the slow grind came through as intended, as does the long tutorial.
We did plan to have fights displayed on the calendar, and there were originally 4 planned (1 each week), which would unlock on completion respectively. (There was also a countdown made, but was not implemented due to rushing for the deadline.)
The text did have a variable which allowed for varying speeds, etc. but we did not utilize them due to being rushed for deadline.
The game ends at the first fight, so you've experienced all of the story (for now).
In regards to the boss fight being too difficult; originally the fight was playtested with placeholder art, and the positioning/wind-ups made the fight much easier to parse. However upon rushing to implement as much final art as possible before the deadline, we did not have time to properly playtest the fight, and so it may be difficult to read which direction to dodge, etc.
The fights were also playtested with a slower BPM track, and were only updated to a faster BPM before submission; which in hindsight was a mistake on my part to do, because I had only playtested according to an easier fight.
Apologies if it was needlessly difficult because of this.
The On Beat detection is definitely something we'll look into, and it went through many revisions throughout the process of making the prototype.
(I think one of the bigger issues with keeping time currently is the lack of visual/audio feedback that lets you know if you are on beat correctly/incorrectly. Originally the Player's and Opponents Hearts were meant to beat in time with the track, acting a visual metronomes for the Player. This is mildly implemented, but not properly, and thus becomes confusing rather than helpful.)
The game will be updated post-jam review phase, so keep a look out for the updated version/s.

The mini games were so funny :)

P.S. please upload HTML5 or add Linux and Mac versions. Had to run this under WINE, may have been running in an intended way with bugs, sometimes it got stuck.

Hello, I'm glad you enjoyed the game.
I didn't realize that I had accidentally referenced the FF7 opening motif (our artist also pointed it out to me), but we left it in as I was fond of the theme.
Unfortunately we're not able to add more versions whilst the jam review period is active, but we will try to add a HTML version once the jam has finished.
Thank you for playing, and for posting a review.

Im get a rocky vibe here. Really love the character design and the story helps drive the game along very well. I love the concept of the rythym based fighter mechanics would have been awesome if with more time you can make actual boxing matches with ai enemys similiar to punch out. Awesome job guys!

Hello, thank you for playing and for the review.
Rocky was definitely a source of inspiration (although I haven't actually seen it, it was more the archetype of "underdog boxer").
I am also very fond of the idea of a rhythm boxer/fighter. I think it is very much an untapped genre, but due to the technical / design difficulties, I understand why this market hasn't been explored as much yet.
Thank you for the compliments, we actually had many more assets and potential fights that unfortunately didn't make it into the cut, due to rushing for the deadline.
These assets will be added in a later update after the jam reviews finish, so be on the look out for that.