How many Max's does it take to screw in a lightbulb?
Submitted by BrokenCogGames, Maxter10001 — 1 hour, 46 minutes before the deadline
Add to collection 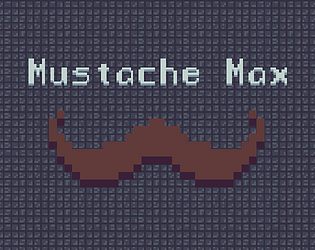 Nice little game! With nice level, smooth control (the wall jump is not ideal but already quite good), and good art and music.

I think the leaderboard is great for a short but tricky game like this. I like when the theme is more present but it was fun to play, so why complaining?

This was a really cool game! Simple goals and you knew exactly what to do right away.

The wall jumping is a bit tricky for me. Most of the time I'm trying to reach a platform with a double jump and I do a wall jump instead, sending me in a direction I wasn't intending. Honestly, perhaps if you only had double jumping OR wall jumping, that would be less of an issue, or, somehow require a bit of a different key combo (hard with minimal controls idea) for wall jumping.

Also... just an opinion... if the guy is turning on lights, it would have been cool to see some light and shadow effects in conjunction with turning on the lights. Just a random idea, but not something that takes away from the game without it.

I really liked this! This felt like the right scope for a leaderboard (I still can't crack 1 minute). The controls were tight. I couldn't always wall-jump like I wanted to, but I think that's more on me than a reflection on the controls.

I really appreciated a controller option too.  One thing that might have been nice to help with speed-running could have been a way to dash.

Music sounded great and I really liked the menu/title layout.

Very cool game man, i just don't fell into doing until the end because of the wall jump, but the desing, art and main music are really great!

I ended up coming back and finishing it, the wall just gets better if you keep playing :D

LikeReply
Anirudh Is OnlineSubmitted1 year ago(+1)

The pixel art style dungeon and audio were really nice , but at time i didn't know where to go and felt the levels were somewhat hard for me personally , the obstacles and spikes is cool :D

It's a nice dungeon platformer, very polished on the artistic level. I would just say that the wall jumping could be improved, because I found myself very frustrated sometimes because of it.

I absolutely love the music! It was hard to wall-jump though.

Seems to be a common theme! I think I was close, but I agree there is something off about that darn wall jump haha

Ok, I'm the king of the leaderboards. CoolCat I'll get the number one soon but I HAVE to comment this. There's a big problem with the wall jumping. What I suspect is happening is that you turn the player around and THEN check the inputs, so if I press right the same frame I walljump my character turns around once from the wall jump and then again from my input so I end up getting pushed into the wall. This is extremely frustrating when trying to speedrun, I'm trying to change my timing and I will figure it out eventually but there's such a big lenience to this issue that I'm actually able to scale walls pretty consistently.

Ok, you're clearly doing this already I just noticed. XD So maybe you're not disabling them at the frame the wall jumped is registered but the frame afterwards? hmmm

Firstly, I really appreciate your review! Great to see another challenger on the leader board.

I was definitely working on the wall jump down to the last hour, and I agree there is some strangeness there. I typically will try to press into the wall longer than I need to, to make sure I get sprung away from the wall. I noticed that Celeste did something similar with their wall jumping, albeit I did not quite emulate it very well :P. I do in fact disable user input after jumping, but I noticed that if I disable it for too long it makes tight walls on either side hard to get up. I'd love to go back post-jam and tighten the wall jump up a bit more :)

Good luck on getting that top score!

Alrighty, got the first place. CoolCat Here's the video:

Phew! It would have been much easier without that walljump bug, I lost over 50 runs just trying to scale to the level right above the start. Few small QOL ideas I had:

1. Coyote jumping is amazing, and it also fixes the issue where you accidentally use your double jump the frame after leaving a platform. At the right most section with the spinning blade and spring several times I tried jumping onto the spring but ended up wasting my double jump because the steps are small so while running down them; the window of time in which I'm actually standing on the ground is quite small. Also adding it to walljumps too would be really cool but not nessesary.

2. The jump height variance for walljumps doesn't feel amazing.. though not bad either, I'm kinda iffy about that. It threw me into a loop at the start but I figured it out.

3. Another small thing is the size of the spikes, make the hitbox a tiny bit smaller so when I get hit I KNOW it was my fault. I had few cases where I barely touched a spike and died.


Overall it was a pretty good platformer, simple and straight forward.The dungeon looked great, the player character ok. Putting aside the bug with walljumping the feeling of the movement was overall great. It was a very enjoyable game to speedrun. You did a great job mate.
LikeReply
BrokenCogGamesDeveloper1 year ago

I appreciate your very thorough comment! Those are a lot of good ideas. I do have some coyote time, but perhaps I should extend the number of frames it allows. I tried to add a few frames where you could face away from the wall and still wall jump, but it seems it needs some work there still as well.

Very impressive that you were able to get that high of score! At this point I may give up trying to get it myself :)

Thanks again for all the feedback!

LikeReply
Armanlex1 year ago
Ok, I checked closely for coyote jumping and it's there and and it's very generous too. I miss-attributed the problem. I went back to the stairs and like I experienced; jumping while running down them sometimes takes away the double jump.
Another weird thing I noticed is that as I'm jumping on the spring sometimes I get my double jump back, also pressing jump as I land can either almost stop the push from the spring or get a super boost that shoots me to the roof! That's a speerun tech that would definitely save time!
LikeReply
BrokenCogGamesDeveloper1 year ago

Looks like someone took the WR spot from you! 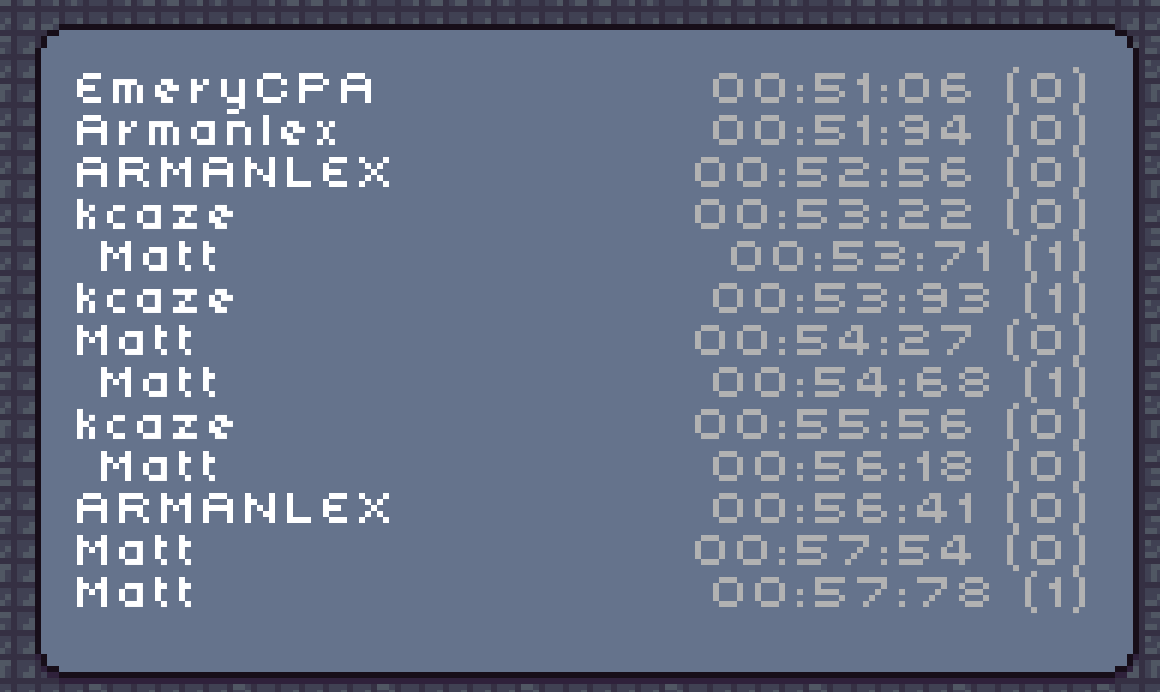 Oh what?! This cannot stand! 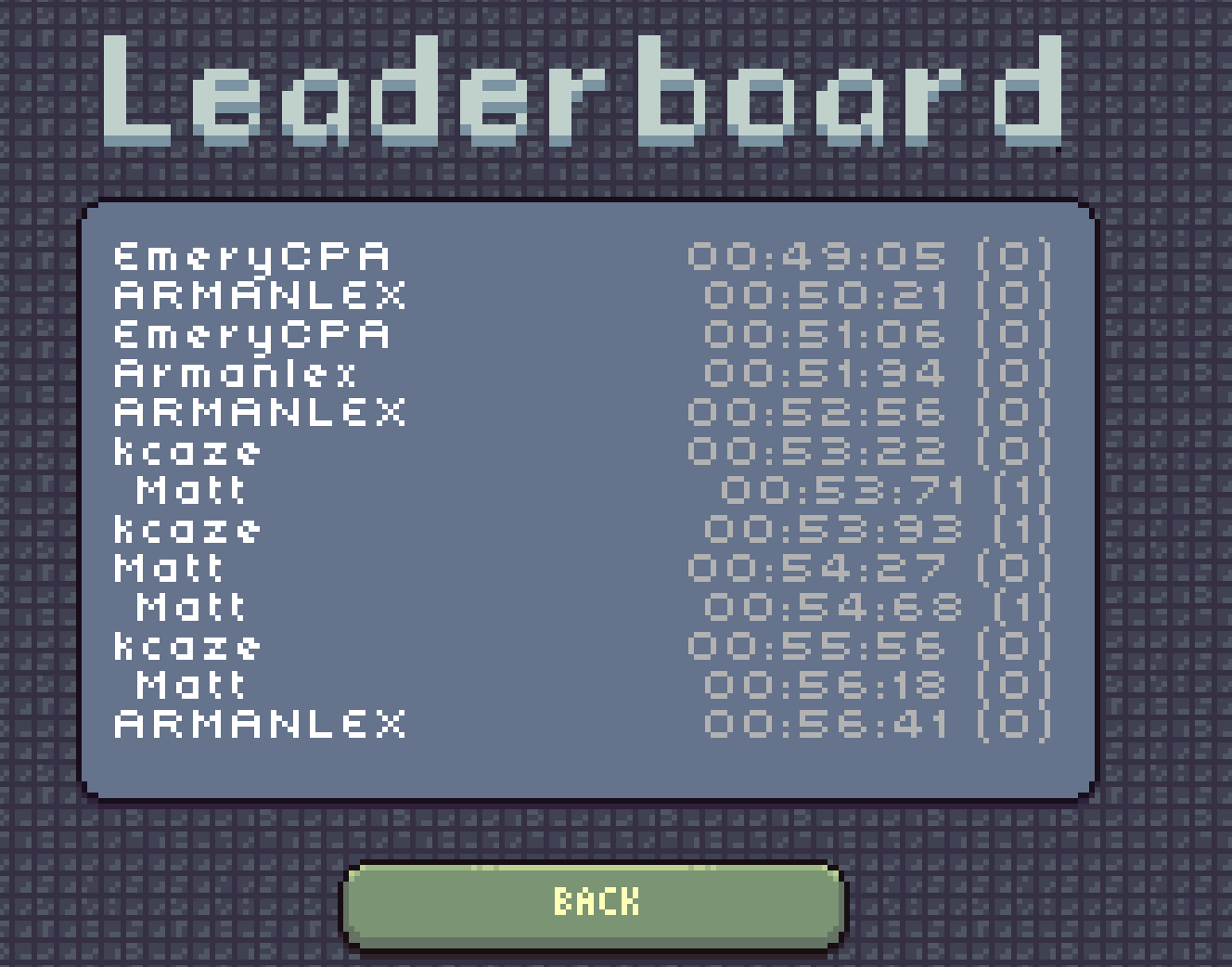 Who even is this guy D:

That is an absurd time. Don't think I can beat it :(

THE KING HAS RETURNED BABBYYYYYYYYYYY CoolCat 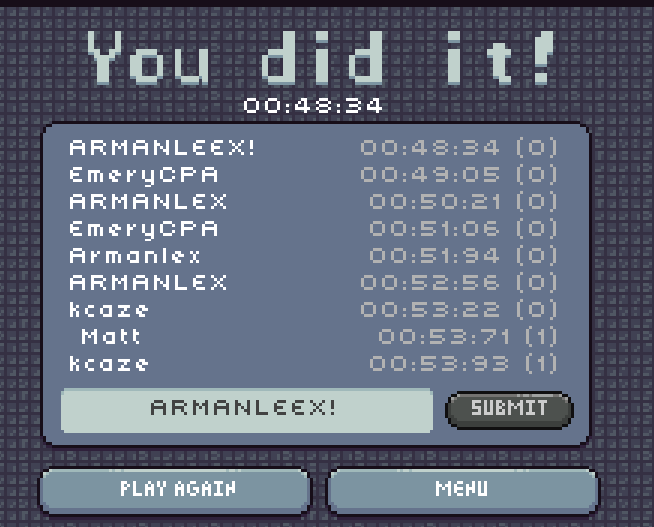 Saw your edit, perhaps I am off by a frame - I will check!

A simple game, yet an amazing level of polish for such a short amount of time! That's a very nice level design. Do you intend to share the source? I'd like to see how you handled the room transitions

Transitions were actually easier than I thought they would be. Consists basically of a Camera2D node, which constantly checks to see if the player has moved off screen. If so, snap to the nearest "window".

Very simple indeed. Thanks for the answer!

That game is VERY nice. Graphics and audio are very superb for the short dvelompent time!

I really enjoyed it :)

Thanks for the kind review! Glad you enjoyed it.

Hey the game is nice and complete! I loved the music. Can you share the way you made the highscore panel? I would like to make something similar in a future game!

For the backend I used Firebase and just POST/GET json data using an HTTPRequest node. For the panel on Godot side, it is just a VBoxContainer to which I add children nodes of type "LeaderboardEntry", which is just a scene made up of an HBoxContainer filled with two labels.

Enjoyed it a lot and snagged the top of the leaderboard for (hopefully) some amount of time! I think the wall jumping is a bit strange since you need to hold into the wall to get the proper jump and holding away makes you jump without the horizontal velocity.

The physics and level design were good!

My friend is pissed you took away his number 1 spot, nice work! :)

Out of curiosity, did you use a controller to keyboard?

I used a keyboard, haven't tried it with a controller.

Well done. I think the wall jumping was very challenging to execute, but overall the controls were tight and the game was fun to play!

Nice! It looks great, the main character animation is lovely and the music is awesome! I just had a hard time with wall jumping. I tried escalating the first wall up and after a few tries I kind of gave up. Maybe it wasn't intended to be doing that? Some other times I were just trying to reach a border and jumped on the opposite direction. Maybe I just suck at it haha

Might be the most complete game I played so for for this jam. Congrats!

Thanks for the feedback! I tried to emulate Celeste's movement and it appears there that you need to press into a wall to jump away from it. Definitely requires some additional finesse when you are using a keyboard. Playing with a controller is wayyyy easier haha

I like the exploration aspect and the verticality of the levels. It felt like I wasn't able to jump high enough to make some of the intended jumps, instead I had to do some wall jump shenanigans to get to a platform that it looked like I was supposed to be able to get to by just doing a normal jump. Nice work on the screen scrolling too, I like how the different sections of the level fit on one screen and how you respawn.

Great game, tight and responsive controls, complementing pretty well with the level design. Nice sprites aswell! Wish there were one or two more levels. Enjoyed it!

Originally we planned on making three levels, but of course we underestimated some of the work it would take to get the movement where we wanted it! Thanks for playing!

Solid game, congratulations on your release. A lot of care and polish, many nice little touches. I liked the scope and the quality of the game. Very nice with the leaderboards too, although my time sucked (I'm not great at platformers).

I'm not sure if it's by design (no platform export), but I noticed that standing still next to a wall and double jumping will instead trigger a double jump even if no arrow key is pressed.

I used Celeste's mechanics as a reference, and I did notice some wall jumping behavior that is a bit odd. I think if I had more time I would take another pass to clean up some of my wall jump logic for sure. Thanks for playing!