Chill out and slide related tiles together while enjoying soothing elevator music.
Submitted by Sausage Factory Games (@ncot_tech) — 1 day, 6 hours before the deadline
Add to collection 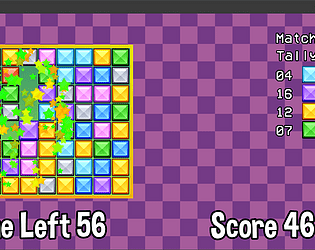 First off, welcome to the jam!! I hope you've had a fabulous time here. :D

The polish in graphics on this was really nice! I love chill matching games like these. My step-mom plays them all time too.

What got me was the moving pieces around. I was surprised that this was keyboard-based rather than mouse? Any reason for that?

I had a lot of fun, being a week long made it less rushed than a 48hr jam, which as nice.

I used keyboard controls for two reasons, the main one being I had a nasty bug with the mouse controls and it stopped me from finishing the rest of the game. I'd also been watching a few YouTube videos of similar games for old consoles which used the controller and it looked like it worked, so I gave it a go.

Fun and simple! I kinda felt like it was cheating just being able to move whatever tile wherever I wanted, but I guess the time constraint does make longer moves less optimal.

I also managed to make it freak out and move all my pieces off the board? Lol 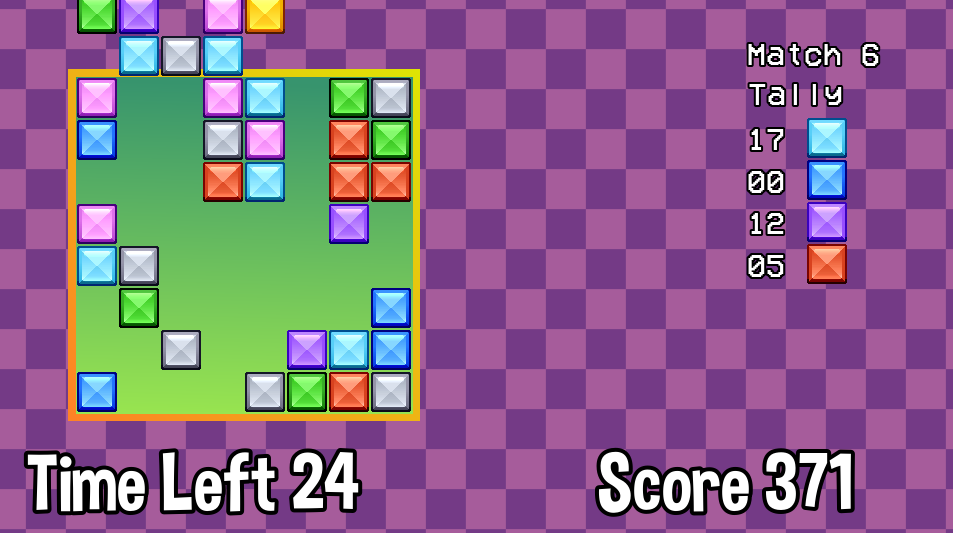 Nicely done! At first the keyboard was odd for me to use for this sort of game, and then once I got used to it I was on a roll. The simplicity of it makes it easy to feel polished, and I liked that there was objectives for each level, nicely done!

This game is plague; it kept me hooked for almost half an hour. XD

Nice implementation of match 3 game. It has a few quirks, one of which is that 2 blue colors (dark and light blue) are a bit hard to distinguish. Other than that, well polished first jam game!

Submitted
The Good, the Bad, and the Veggie
LikeReply
PhildjiiSubmitted1 year ago(+1)

A nice little match 3, if a bit classic. I would have liked to see a little variety in combos or tile types: what about "bad" combos that make you lose time instead? Or dangerous tiles you must absolutely avoid? I still enjoyed the play, and the experience was nice to the eyes and smooth. Well done!

I was waiting for the submission that attempted a square puzzler like this! Great game, nice and simple. I had fun. I wish the combos could've been more obvious to attempt.

Very fun game. I really like the idea of being able to move tiles anywhere on the board to create matches. I noticed a possible bug that appeared on multiple playthroughs. When I get to "Match 6" the game just stops allowing me to match entirely.